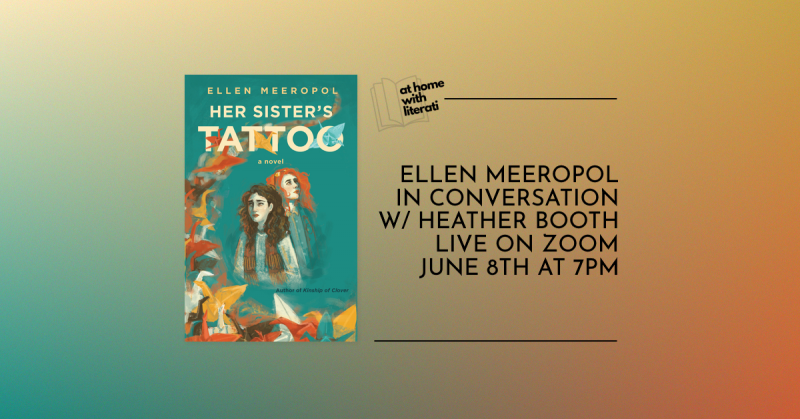 We're pleased to welcome Ellen Meeropol, author of Her Sister's Tattoo, to our At Home with Literati series! she'll be in conversation with noted activist Heather Booth.

About the book: Rosa and Esther march through downtown Detroit in August 1968 to protest the war in Vietnam. When a bloodied teenager reports that mounted police are beating protestors a few blocks away, the young women hurry to offer assistance. They try to stop the violence, but an officer is injured and the sisters are arrested. Rosa sees an opportunity to protest the war in court. Esther has an infant daughter and wants to avoid prison, which means accepting a plea bargain and testifying against her sister. Told from multiple points of view and through the sisters' never-mailed letters, Her Sister's Tattoo explores the thorny intersection of family loyalty and clashing political decisions

Heather Booth is one of the country's leading strategists about progressive issue campaigns and driving issues in elections. She started organizing in the civil rights, anti-Vietnam war and women's movements of the 1960s. She started JANE, an underground abortion service in 1965, before Roe. She was the founding Director and is now President of the Midwest Academy. In 2000, she was the Director of the NAACP National Voter Fund. She was the lead consultant, directing the founding of the Campaign for Comprehensive Immigration Reform in 2005. In 2008, she was the director of the Health Care Campaign for the AFL-CIO. In 2009, she directed the campaign passing President Obama’s first budget. In 2010 Heather was the founding director of Americans for Financial Reform, fighting to regulate the financial industry. She was the national coordinator for the coalition around marriage equality and the 2013 Supreme Court decision. Heather was strategic advisor to the Alliance for Citizenship (the largest coalition of the immigration reform campaign). She was the field director for the 2017 campaign to stop the tax giveaways to millionaires and billionaires. Heather is now working on a campaign to lower prescription drug prices. There is a film about her life in organizing, "Heather Booth: Changing the World." It has been shown on PBS/World Channel stations around the country.