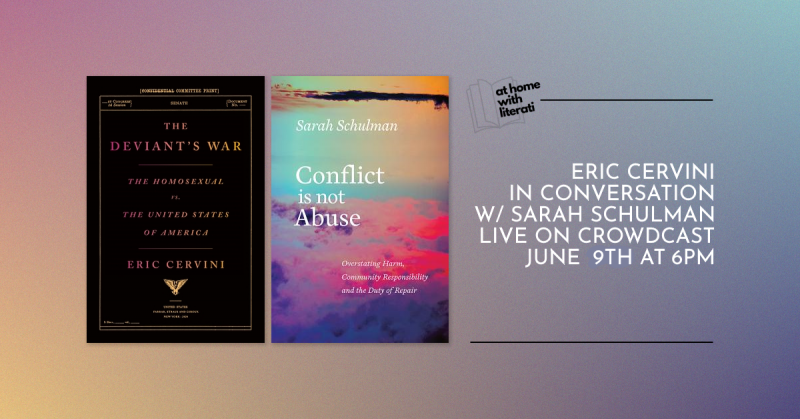 We're pleased to welcome Eric Cervini, author of The Deviant's War: The Homosexual vs. The United States of America, to our At Home with Literati series! The author will be in conversation with novelist, nonfiction writer, and AIDS historian Sarah Schulman.

Click here to register for the event on 6/9, and learn about how you can receive a limited edition signed bookplate!

About the book: "Before Gay Rights, there was Gay Liberation, and before that, the Homophile Movement. Eric Cervini's much needed history of this foundational political formation reveals that highly alienated individuals—whose gifts and talents were rejected because of their homosexuality—found the courage to demand change. Through direct confrontation with the state, these demeaned men and women insisted on paradigm shifts in thinking that cost them dearly. Yet they tolerated stigma, poverty and anti-social labels to literally force the country to transform. An exciting and highly readable history." —Sarah Schulman

Sarah Schulman is a novelist, playwright, screenwriter, nonfiction writer and AIDS historian. Her 20th book, Let The Record Show, a political history of ACT UP, will be published by FSG in May 2021.

The Deviant's War: The Homosexual vs. the United States of America (Hardcover)

Conflict Is Not Abuse: Overstating Harm, Community Responsibility, and the Duty of Repair (Paperback)

The Gentrification of the Mind: Witness to a Lost Imagination (Paperback)