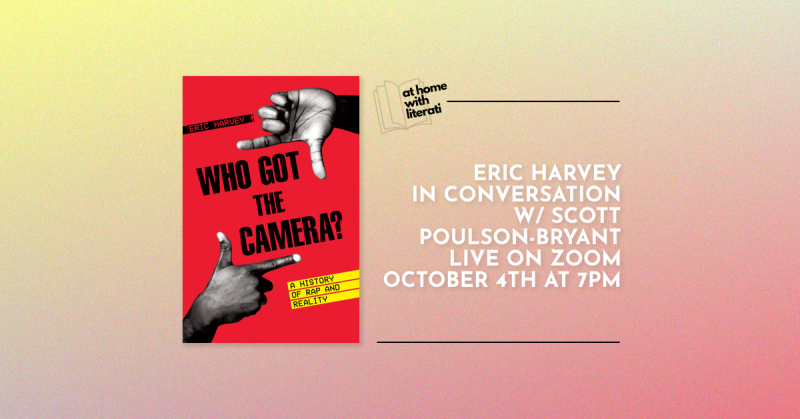 We're pleased to welcome Eric Harvey to our At Home with Literati Series in support of Who Got the Camera?: A History of Rap and Reality. He'll be in conversation with University of Michigan professor of African American Studies Scott Poulson-Bryant.

Click here to join the webinar event on 10/4. No pre-registration required!

About the book: Reality first appeared in the late 1980s--in the sense not of real life but rather of the TV entertainment genre inaugurated by shows such as Cops and America's Most Wanted; the daytime gabfests of Geraldo, Oprah, and Donahue; and the tabloid news of A Current Affair. In a bracing work of cultural criticism, Eric Harvey argues that reality TV emerged in dialog with another kind of entertainment that served as its foil while borrowing its techniques: gangsta rap. Or, as legendary performers Ice Cube and Ice-T called it, "reality rap." Reality rap and reality TV were components of a cultural revolution that redefined popular entertainment as a truth-telling medium.

Reality entertainment borrowed journalistic tropes but was undiluted by the caveats and context that journalism demanded. While N.W.A.'s "Fuck tha Police" countered Cops' vision of Black lives in America, the reality rappers who emerged in that group's wake, such as Snoop Doggy Dogg and Tupac Shakur, embraced reality's visceral tabloid sensationalism, using the media's obsession with Black criminality to collapse the distinction between image and truth. Reality TV and reality rap nurtured the world we live in now, where politics and basic facts don't feel real until they have been translated into mass-mediated entertainment.

Eric Harvey is an associate professor in the School of Communications at Grand Valley State University. His writing has appeared in Pitchfork, The New Yorker, Rolling Stone, The Atlantic, The New Republic, The LA Review of Books, Buzzfeed, MTV.com, and The Village Voice.

Scott Poulson-Bryant is a cultural historian and critic. His main areas of specialization are African American popular culture and Performance Studies, with teaching and research focuses on Hollywood film, black popular music, 20th and 21st century U.S. drama, genre fiction, gender and sexuality studies, and creative nonfiction writing. He received his B.A. in American Civilization from Brown University and his M.A in English and Ph.D. in American Studies from Harvard, where he also taught in the Program in History and Literature and received numerous certificates of distinction in teaching. His research has appeared in The Journal of Popular Music Studies, American Studies, Palimpsest: A Journal on Women, Gender, and the Black International, and Biography: An Interdisciplinary Quarterly, and he is currently finishing his monograph Everybody is a Star: Race, Glamour, and Citizenship in 1970s US Popular Culture. Prior to academia, he worked as a journalist, publishing several articles in The New York Times, Rolling Stone, and The Village Voice, among other publications, and he was one of the founding editors of VIBE Magazine. His books include HUNG: A Meditation on the Measure of Black Men in America (Doubleday) and The VIPs: A Novel (Broadway/Random House).

Who Got the Camera?: A History of Rap and Reality (American Music Series) (Hardcover)