At Home with Literati: Fury, a Panel Discussion 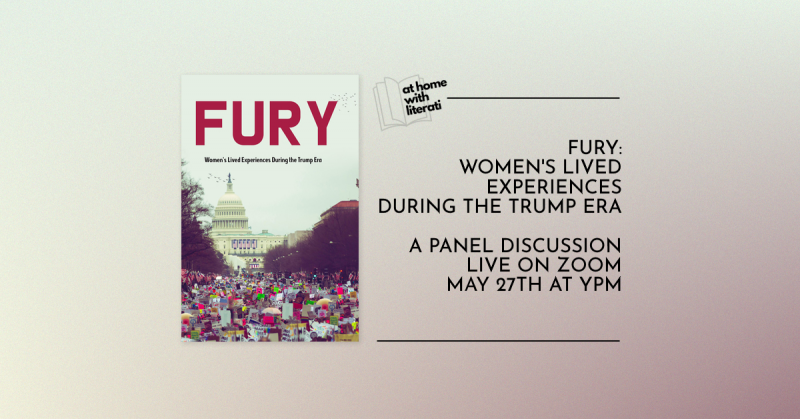 We're pleased to welcome contributors to Fury: Women's Lived Experiences During the Trump Era to our At Home with Literati Series for a panel discussion about the book. The panel will feature Dina Elenbogen, Lea Grover, Alissa Hirshfeld, and Amy Roost.

Note: Meetings are now automatically password protected with wait rooms enabled. The password is entered automatically by clicking the link if you are logged into a Zoom account. We will let guests in off the waiting list shortly after 7 and throughout the event. If you join late, hang in there, we'll let you in when we see you.

Fury: Women’s Lived Experiences During the Trump Era brings together a diverse community of women who reveal the impact Donald Trump’s behavior, words, and presidency has had on each one of them, how each is confronting the problem, and how she is fighting back.

Most readers will identify with more than one of these powerfully authentic and revealing personal essays representing a refreshingly broad representation of viewpoints. And that is exactly why Fury matters: it will help the reader feel less alone, work through some of their own hurt and pain, and formulate a plan for what they can do to bring about an end to the Trump presidency.

Fury is a cohesive narrative of the times we live in, and chronicles a unique chapter in history for the edification of generations of women and allies to follow.

Dina Elenbogen, a widely published and award winning poet and prose writer is author of the memoir, Drawn from Water (BKMk Press, University of Missouri) and the poetry collection Apples of the Earth (Spuyten Duyvil, NY) Her work has appeared in anthologies including, Fury: Women's Lived Experience During the Trump Era (Regal Books, 2020) City of the Big Shoulders (University of Iowa Press) Beyond Lament (Northwestern University press), Where We Find Ourselves (SUNYPress),  Rust Belt Chicago Anthology, and magazines and journals including Lit Hub, December magazine, Prairie Schooner, Poet Lore, Bellevue Literary Review, Woven Tale Press, Tiferet, Tikkun, Paterson Literary Review,  New City Chicago and the Chicago Reader. She has received fellowships in poetry and prose from the Illinois arts Council and the Ragdale Foundation.  She has just completed an essay collection Eating and Drinking with Sages which is in circulation. You can visit her at http://www.dinaelenbogen.com/.

Lea Grover is a writer, blogger, and speaker in Chicago, though as a former Community High School student and Diag rat, she will always consider Ann Arbor her home. Lea’s writing is featured in many anthologies and textbooks, including “Listen To Your Mother: What She Said Then, What We’re Saying Now,” "Sex Matters: The Sexuality and Society Reader," and "FURY: Women's Lived Experiences During the Trump Era." She speaks on behalf of the RAINN Speakers Bureau as a survivor of sexual violence. She is represented by the Dee Mura Literary Agency.

Alissa Hirshfeld balances a psychotherapy practice with parenting and writing. Her academic articles have appeared in American Journal of Psychiatry, Creativity Research Journal, and The Therapist Magazine. She is the author of a memoir, This Whole Wide World is Just a Narrow Bridge, and a novel Living Waters: From Harvard Halls to Sacred Falls. Ms. Hirshfeld-Flores is active in the Duty to Warn movement, warning about the danger this president presents to the public mental health.

Amy Roost is a documentary podcaster and freelance journalist. She is an Annenberg School of Journalism 2019 California Health Journalism Fellow and recipient of numerous journalism awards for her op-ed columns appearing in San Diego Union Tribune publications. Her forthcoming memoir is based on a 2017 Snap Judgment podcast she wrote and produced about how she replaced a Black child that her parents adopted and later returned in 1962.