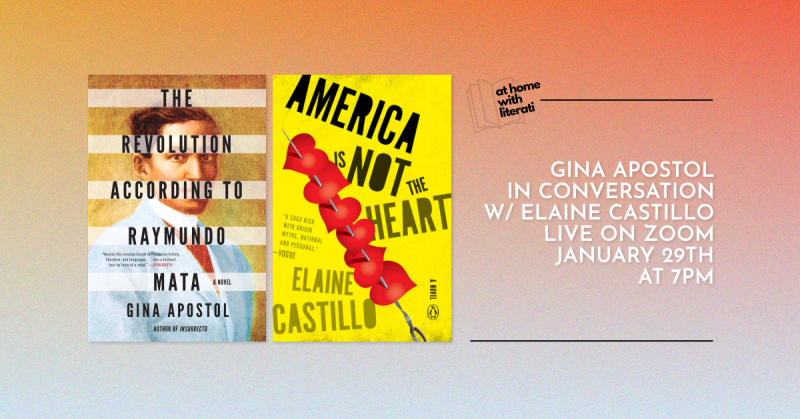 We're pleased to welcome Gina Apostol in support of The Revolution According to Raymundo Mata. She'll be in conversation with author Elaine Castillo.

Raymundo Mata is a nightblind bookworm and a revolutionary in the Philippine war against Spain in 1896. Told in the form of a memoir, the novel traces Mata’s childhood, his education in Manila, his love affairs, and his discovery of the books of the man who becomes the nation’s great hero José Rizal (Rizal, in real life, is executed by the Spaniards for writing two great novels that spark revolution—the Noli Me Tangere and El Filibusterismo. At the time Rizal died, he was working on a third novel, Makamisa).

Raymundo Mata’s autobiography, however, is de-centered by another story: that of the development of the book. In the foreword(s), afterword(s), and footnotes, we see the translator Mimi C. Magsalin (a pseudonym), the rabid nationalist editor Estrella Espejo, and the neo-Freudian psychoanalyst critic Dr. Diwata Drake make multiple readings of the Mata manuscript. Inevitably, clashes between these readings occur throughout the novel, and in the end the reader is on a wild chase to answer enduring questions: Does the manuscript contain Makamisa or is it Makamisa? Are the journals an elaborate hoax? And who is the perpetrator of the textual crime?

In this story about the love of books, the story of a nation emerges. But what is a nation? What The Revolution According to Raymundo Mata imagines is that through acts of reading, a nation is born.

Gina Apostol’s third book, Gun Dealers’ Daughter, won the 2013 PEN/Open Book Award and was shortlisted for the William Saroyan International Prize. Her first two novels, Bibliolepsy and The Revolution According to Raymundo Mata, both won the Juan Laya Prize for the Novel (Philippine National Book Award). She was writer-in-residence at Phillips Exeter Academy and a fellow at Civitella Ranieri in Umbria, Italy, among other fellowships. Her essays and stories have appeared in The New York Times, Los Angeles Review of Books, Foreign Policy, Gettysburg Review, Massachusetts Review, and others. She lives in New York City and western Massachusetts and grew up in Tacloban, Philippines. She teaches at the Fieldston School in New York City.

Elaine Castillo was born in the San Francisco Bay Area. She is a graduate of the University of California, Berkeley. America Is Not the Heart is her first novel.
Event address:
Live on your device
Books:

The Revolution According to Raymundo Mata (Hardcover)

America Is Not the Heart: A Novel (Paperback)