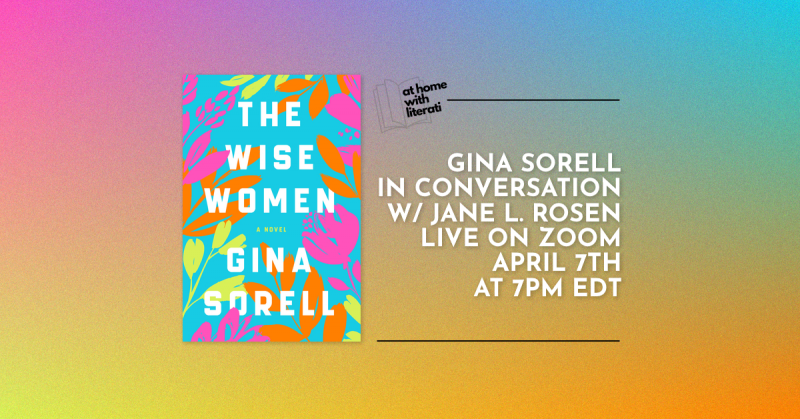 We're pleased to welcome Gina Sorell to our At Home with Literati Series in support of The Wise Woman. She will be joined in conversation by Jane L. Rosen.

Click here to join the webinar event on 4/7. No pre-registration required!

One of Read With Jenna's Most Anticipated Books of 2022

Popular advice columnist Wendy Wise has been skillfully advising the women who write to her seeking help for four decades, so why are her own daughters' lives such a mess? Clementine, the working mother of a six-year-old boy, has just discovered that she is actually renting the Queens home that she thought she owned, because her husband Steve secretly funneled their money into his flailing start-up. Meanwhile, her sister Barb has overextended herself at her architecture firm and reunited semi-unhappily with her cheating girlfriend.

When Steve goes MIA and Clementine receives an eviction notice, Wendy swoops in to save the day, even though her daughters, who are holding onto some resentments from childhood, haven't asked for her help. But as soon as Wendy sets her sights on hunting down her rogue son-in-law, Barb and Clementine quickly discover that their mother has been hiding more than a few problems of her own.

As the three women confront the disappointments and heartaches that have accumulated between them over the years, they dis

cover that while the future may look entirely different from the one that they've expected, it may be even brighter than they'd hoped.

After two decades of working as an actor, Gina Sorell returned to her first love--writing. A graduate with distinction of UCLA Extension Writers' Program, she is the author of Mothers and Other Strangers. Originally from Johannesburg, Gina has lived in New York and Los Angeles, and now lives in Toronto with her husband and son. Gina balances the solitary hours of fiction writing with work as a creative director and brand storyteller under the banner of her own agency, Words Make The Brand.

Jane L. Rosen is an author and screenwriter whose critically acclaimed first novel, Nine Women, One Dress, has been translated into ten languages. She lives in New York City and on Fire Island with her husband and three daughters.

The Wise Women: A Novel (Hardcover)

Mothers and Other Strangers (Paperback)