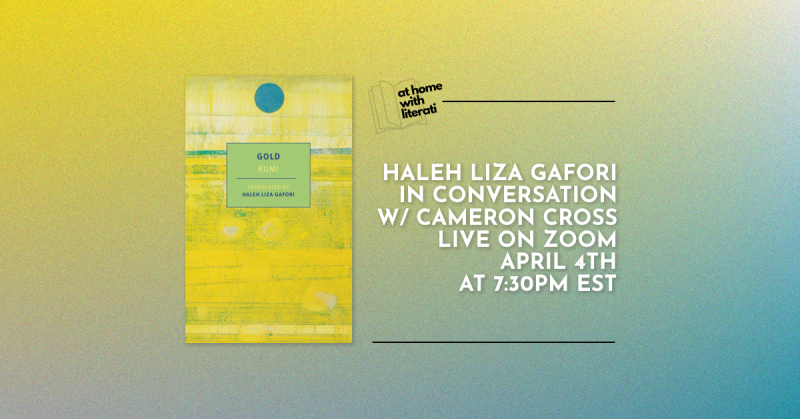 We're pleased to welcome Haleh Liza Gafori to our At Home with Literati Series in support of her translation, Gold, by Rumi. She will be joined in conversation by Cameron Cross.

Click here to join the webinar event on 4/4. No pre-registration required!

A selection of the NYRB Classics Book Club
Rumi’s poems were meant to induce a sense of ecstatic illumination and liberation in his audience, bringing its members to a condition of serenity, compassion, and oneness with the divine. They remain masterpieces of world literature to which readers in many languages continually return for inspiration and succor, as well as aesthetic delight. This new translation by Haleh Liza Gafori preserves the intelligence and the drama of the poems, which are as full of individual character as they are of visionary wisdom.

Marilyn Hacker praises Gafori’s new translations of Rumi as “the work of someone who is at once an acute and enamored reader of the original Farsi text, a dedicated miner of context and backstory, and, best of all, a marvelous poet in English.”

Haleh Liza Gafori is a poet, translator, and musician born in NYC of Persian descent. Her poems have been published by Columbia University Press and Rattapallax. As a vocalist, she has performed at venues such as David Byrne’s One Note at Carnegie Hall and Bonnaroo. She teaches workshops on Rumi’s poetry at universities and festivals across the country.

Cameron Cross is an assistant professor of Iranian Studies at the University of Michigan, Ann Arbor. Along with teaching courses in modern Iranian cinema, prose, and poetry, he specializes in the thought and literature of the medieval Islamic world, particularly Persian poetry. His forthcoming book, Love at a Crux, explores the rise of Persian romance through a comparative and transregional framework.