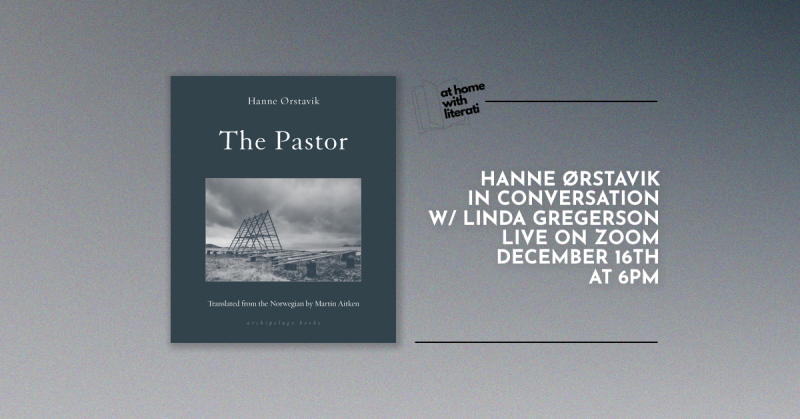 We're pleased to welcome Hanne Ørstavik to our At Home with Literati Series in support of The Pastor. She will be joined in conversation by Linda Gregerson.

Click here to join the webinar event on 12/16. No pre-registration required!

A thought-provoking, existential novel - as Liv searches for meaning and identity in her own life, she must find the words to connect, comfort and lead others.

Liv, an intense and reticent theologian, moves to a bitterly cold fishing village to take up a post as the church's new pastor following the death of her friend, Kristiane. In the upper rooms of a large house overlooking the fjord, Liv plans her sermons and studies the violent interplay of Norway's Christian colonial past. She trails downstairs into the apartment below for dinners and breakfasts with a widow and her two children. As Liv becomes acquainted with the villagers and their own private tragedies, memories bloom in passages that urgently question the unpredictable bedrock of language, and the peculiar channels of imagined experience as it might have been, if only there had been a different set of words, or an outstretched hand.

The past mingles darkly with the present, cascading in chilling images: a dog lying dead in the snowy plains, Kristiane's teeth flashing as she laughs, a procession of singing, knife-carrying protesters curving along a river's edge. Martin Aitken's translation of this extraordinary novel rings with the brilliance and rigor of a master.

Hanne Ørstavik, one of the most admired and prominent writers in contemporary Norwegian fiction, published her first novel Cut in 1994. Ørstavik has written a number of acclaimed novels that have been translated into more than 16 languages. She has been awarded a host of literary prizes, including the Dobloug Prize, presented annually for Swedish and Norwegian fiction by the Swedish Academy. The English translation of Love was a finalist for a National Book Award.

Linda Gregerson is the author of six previous collections of poetry, most recently of Prodigal: New and Selected Poems. A former Chancellor of the Academy of American Poets, Gregerson is the Caroline Walker Bynum Distinguished University Professor at the University of Michigan, where she directs the Helen Zell Writers' Program.