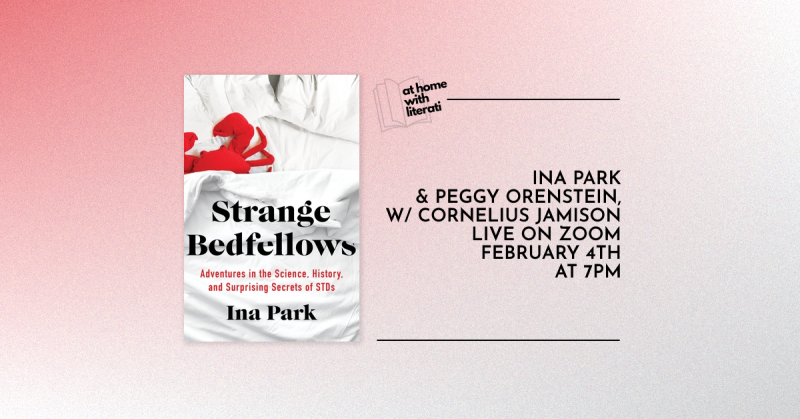 We're pleased to welcome Ina Park in support of Strange Bedfellows. She'll be in conversation with Peggy Orenstein for an event moderated by the University of Michigan's Cornelius Jamison.

About the book: With curiosity and wit, Strange Bedfellows rips back the bedsheets to expose what really happens when STDs enter the sack.

Sexually transmitted diseases have been hidden players in our lives for the whole of human history, with roles in everything from World War II to the growth of the Internet to The Bachelor . But despite their prominence, STDs have been shrouded in mystery and taboo for centuries, which begs the question: why do we know so little about them?

Enter Ina Park, MD, who has been pushing boundaries to empower and inform others about sexual health for decades. With Strange Bedfellows, she ventures far beyond the bedroom to examine the hidden role and influence of these widely misunderstood infections and share their untold stories.

Covering everything from AIDS to Zika, Park explores STDs on the cellular, individual, and population-level. She blends science and storytelling with historical tales, real life sexual escapades, and interviews with leading scientists--weaving in a healthy dose of hilarity along the way.

The truth is, most of us are sexually active, yet we're often unaware of the universe of microscopic bedfellows inside our pants. Park aims to change this by bringing knowledge to the masses in an accessible, no-nonsense, humorous way--helping readers understand the broad impact STDs have on our lives, while at the same time erasing the unfair stigmas attached to them.

A departure from the cone of awkward silence and shame that so often surrounds sexual health, Strange Bedfellows is the straight-shooting book about the consequences of sex that all curious readers have been looking for.

Ina Park MD, MS, is an associate professor at the University of California San Francisco School of Medicine, Medical Consultant at the Centers for Disease Control and Prevention, Division of STD Prevention, and Medical Director of the California Prevention Training Center. She holds degrees from the University of California Berkeley, UCLA School of Medicine, and the University of Minnesota School of Public Health. Recently, Park served as a co-author of the 2020 CDC STD Treatment Guidelines and contributor to the Department of Health and Human Services STI Federal Action Plan. A fierce advocate for public health, she lives in Berkeley, CA with her husband and two sons.

Peggy Orenstein is the New York Times bestselling author of Don't Call Me Princess, Girls & Sex, Cinderella Ate My Daughter, Waiting for Daisy, Flux, and Schoolgirls. A contributing writer for the New York Times Magazine and Afar, she has also been published in New York, The Atlantic, The New Yorker, and other publications. Her TED Talk has received over four million views. She lives in Northern California with her husband and daughter.

Cornelius D. Jamison is a Family Medicine physician and health services researcher. He is currently a clinical lecturer in the department of Family Medicine at Michigan Medicine and serves as Co-Medical Director of Adolescent Health Initiative. His passion revolves around adolescent and sexual health, specifically preventing the transmission of sexually transmitted infections among minority and underserved individuals. His career in academic medicine focuses on integrating the clinical duties of a primary care physician with his interests in healthcare research and health policy to improve the care for adolescent and patients in underserved communities.

Strange Bedfellows: Adventures in the Science, History, and Surprising Secrets of STDs (Hardcover)