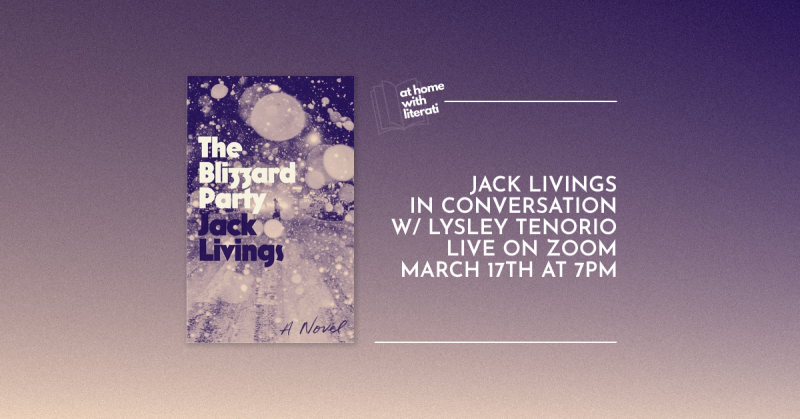 We're pleased to welcome Jack Livings in support of The Blizzard Party. He'll be in conversation with Lysley Tenorio.

About the book: A panoramic novel set in New York City during the catastrophic blizzard of February 1978

On the night of February 6, 1978, a catastrophic nor'easter struck the city of New York. On that night, in a penthouse in the Upper West Side's stately Apelles, a crowd gathered for a wild party. And on that night, Mr. Albert Haynes Caldwell--a partner emeritus at Swank, Brady & Plescher; Harvard class of '26; father of three; widower; atheist; and fiscal conservative--hatched a plan to fake a medical emergency and toss himself into the Hudson River, where he would drown.

In the eye of this storm: Hazel Saltwater, age six. The strange events of that night irrevocably altered many lives, but none more than hers. The Blizzard Party is Hazel's reconstruction of that night, an exploration of love, language, conspiracy, auditory time travel, and life after death.

Cinematic, with a vast cast of characters and a historical scope that spans World War II Poland, the lives of rich and powerful Manhattanites in the late 1970's, and the enduring effects of 9/11, Jack Livings's The Blizzard Party is an epic novel in the form of a final farewell.

Jack Livings is the author of The Dog, which was awarded the PEN / Robert W. Bingham Prize, the Rome Prize for Literature, and was included on best book of the year lists by the Times Literary Supplement and The New York Times. His short stories have appeared in Best American Short Stories and have been awarded two Pushcart Prizes. The Blizzard Party is his first novel. He lives in New York with his family.

Lysley Tenorio is the author of the novel The Son of Good Fortune and the story collection Monstress, named a book of the year by the San Francisco Chronicle. He is the recipient of a National Endowment for the Arts fellowship, a Whiting Award, a Stegner fellowship, and the Rome Prize from the American Academy of Arts and Letters, as well as residencies from the MacDowell Colony, Yaddo, and the Bogliasco Foundation. His stories have appeared in the Atlantic, Zoetrope: All-Story, and Ploughshares, and have been adapted for the stage by The American Conservatory Theater in San Francisco and the Ma-Yi Theater in New York City. He is a professor at Saint Mary's College of California.

The Blizzard Party: A Novel (Hardcover)

The Son of Good Fortune: A Novel (Paperback)