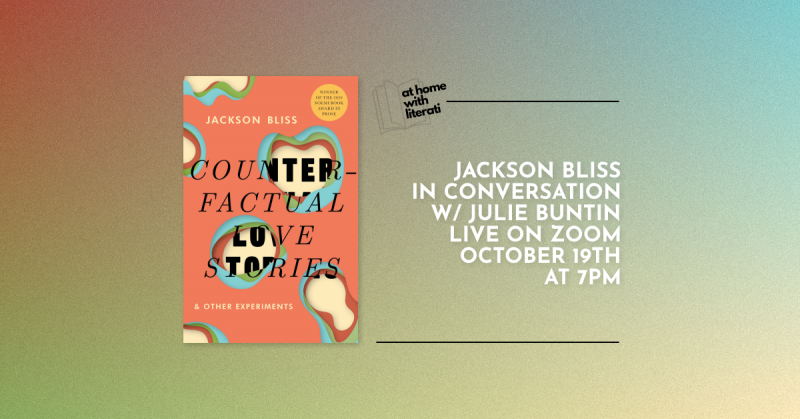 We're pleased to welcome Jackson Bliss to our At Home with Literati Series in support of Counterfactual Love Stories and Other Experiments. He'll be joined in conversation by Julie Buntin.

Click here to join the webinar event on 10/19. No pre-registration required!

About the book: From fragmented ransom notes to hanging footnotes, contemporary fairy tales to coded text, interconnecting pieces of modal flash fiction to backwards fractal narratives about gradual blindness, transgressive listicles to how-to guides for performative wokeness, variable destinies in downtown Chicago to impossible dating applications, counterfactual relationships to the French translation of adolescence, the conceptual, language-driven short stories in COUNTERFACTUAL LOVE STORIES AND OTHER EXPERIMENTS are an exploration of not just mixed-race/hapa identity in Michigan (and the American Midwest), but also of the infinite ways in which stories can be told, challenged, celebrated, and subverted.

Jackson Bliss is a (non) fiction writer, librettist, screenwriter, and composer. He is the mixed-race/hapa author of Amnesia of June Bugs (7.13 Books, 2022), Dream Pop Origami (Unsolicited Press, 2022), and the speculative fiction hypertext, Dukkha, My Love (2017). His writing has appeared in the New York Times, Tin House, Ploughshares, Guernica, Antioch Review, TriQuarterly, ZYZZYVA, Columbia Journal, Boston Review, Longreads, Fiction, Witness, Kenyon Review, among others. He lives in LA with his wife and their two dogs.

Julie Buntin is from northern Michigan. Her debut novel, Marlena, was a finalist for the National Book Critics Circle’s John Leonard Prize, translated into ten languages, and named a best book of the year by over a dozen outlets, including the Washington Post, NPR, and Kirkus Reviews. Her writing has appeared in the Atlantic, Vogue, the New York Times Book Review, Guernica, and elsewhere. She has received fellowships from Bread Loaf and the MacDowell Colony, and is an editor-at-large at Catapult. Her novel-in-progress is the winner of the 2019 Ellen Levine Fund for Writers Award. She teaches creative writing at the University of Michigan.