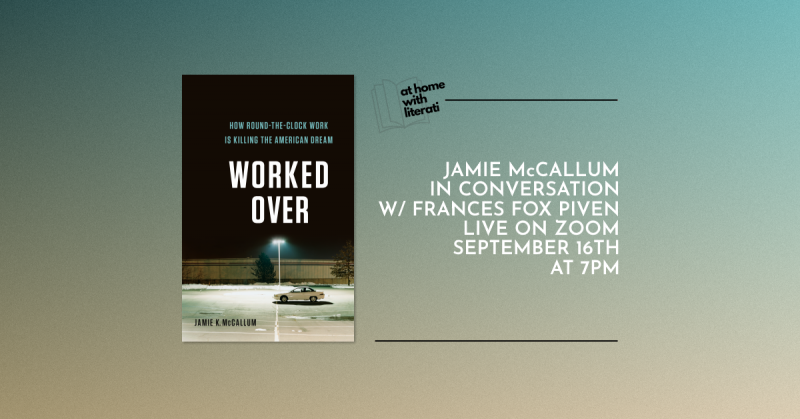 We're pleased to welcome Jamie K. McCallum to discuss his book, Worked Over: How Round-the-Clock Work Is Killing the American Dream, as part of our At Home with Literati series of virtual events. He'll be in conversation with bestselling author and scholar Frances Fox Piven

About the book: Most Americans work too long and too hard, while others lack consistency in their hours and schedules. Work hours declined for a century through hard-fought labor-movement victories, but they’ve increased significantly since the seventies. Worked Over traces the varied reasons why our lives became tethered to a new rhythm of work, and describes how we might gain a greater say over our labor time — and build a more just society in the process.

Popular discussions typically focus on overworked professionals. But as Jamie K. McCallum demonstrates, from Amazon warehouses to Rust Belt factories to California’s gig economy, it’s the hours of low-wage workers that are the most volatile and precarious — and the most subject to crises. What’s needed is not individual solutions but collective struggle, and throughout Worked Over McCallum recounts the inspiring stories of those battling today’s capitalism to win back control of their time.

Jamie K. McCallum is professor of sociology at Middlebury College. His first book, Global Unions, Local Power, won the American Sociological Association’s prize for the best book on labor. His work has appeared in scholarly journals and popular outlets such as the Washington Post, Mother Jones, Dissent, and Jacobin. He lives in Weybridge, Vermont.

Frances Fox Piven is Distinguished Professor of Political Science and Sociology at The Graduate Center, CUNY, and the author of the bestselling Poor People's Movements, Regulating the Poor, and Why Americans Don't Vote (with the late Richard A. Cloward).

Worked Over: How Round-the-Clock Work Is Killing the American Dream (Hardcover)