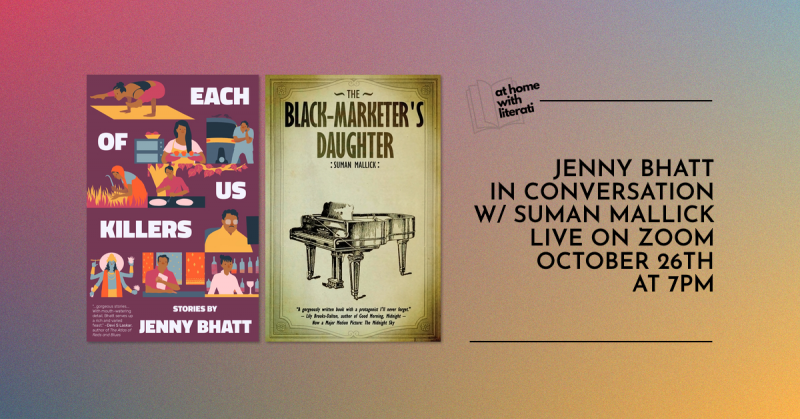 We're pleased to welcome Jenny Bhatt and Suman Mallick to our At Home with Literati virtual event series in support of their recent titles, and for a themed discussion of norm-defying South Asian protagonists in fiction.

Note: we are now hosting on Zoom webinars. You will be prompted to enter a first name and email upon joining. You'll enter the event when it begins and will be able to submit questions using the Q&A feature.

Jenny Bhatt is a writer, literary translator, and literary critic. Her writing has appeared or is forthcoming in various venues in the US, UK, and India, including NPR, The Atlantic, BBC Culture, Literary Hub, Longreads, The Millions, and others. Her fiction has been nominated for Pushcart Prizes and the 2017 Best American Short Stories. She was a finalist for the 2017 Best of the Net Anthology. Having lived and worked her way around India, England, Germany, Scotland, and various parts of the US, she now lives in a suburb of Dallas, Texas

Suman Mallick's debut novel The Black-Marketer's Daughter was shortlisted for the Disquiet Open Borders Book Prize, and praised by the jury as a “complicated and compelling story” of our times.Suman is the new Assistant Managing Editor of the literary magazine Under the Gum Tree, now entering its 10th year. He received his Master of Fine Arts from Portland State University, where he also taught English and Creative Writing. He makes his home in Texas with his beloved daughter and dog. .

Each of Us Killers (Paperback)

No One Can Pronounce My Name: A Novel (Paperback)