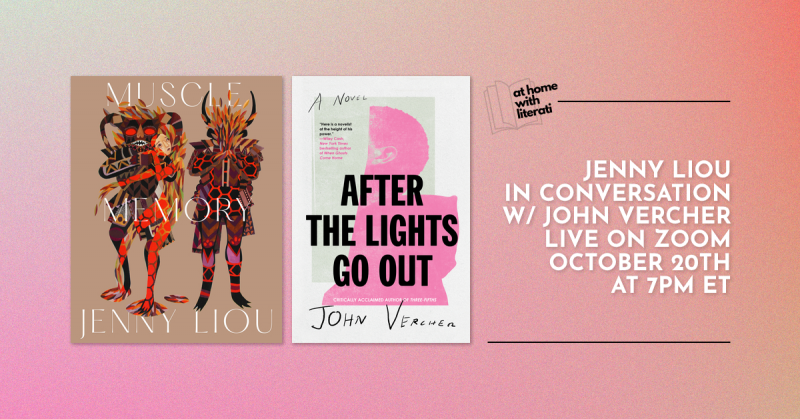 We're pleased to welcome Jenny Liou to our At Home with Literati Series in support of Muscle Memory. She will be joined in conversation by John Vercher.

Click here to join the webinar event on 10/20. No pre-registration required!

In Muscle Memory, Washington-based poet Jenny Liou grapples with violence and identity, beginning with the chain-link enclosure of the prizefighter's cage and radiating outward into the diasporic sweep of Chinese American history. Liou writes with spare, stunning lyricism about how cage fighting offered relief from the trauma inflicted by diaspora's vanishing ghosts; how, in the cage, an elbow splits an eyebrow, or an armbar snaps a limb, and, even when you lose a fight, you've won something: pain. Liou places the physical manifestation of violence in her sport alongside the deeper traumas of immigration and her own complicated search for identity, exploring what she inherited from her Chinese immigrant father--who was also obsessed with poetry and martial arts. When she finally steps away from the cage to raise children of her own, Liou begins to question how violence and history pass from one generation to the next, and whether healing is possible without forgetting.

Jenny Liou (born 1983) is an English professor at Pierce College and a retired professional cage fighter. She lives and writes in Covington, Washington.

John Vercher lives in the Philadelphia area with his wife and two sons. He has a Bachelor’s in English from the University of Pittsburgh and an MFA in Creative Writing from the Mountainview Master of Fine Arts program. He is a contributing writer for WBUR Boston’s Cognoscenti, and NPR features his essays on race, identity, and parenting. His debut novel, Three-Fifths, was named one of the best books of the year by the Chicago Tribune, CrimeReads, and Booklist. It was nominated for the Edgar, Anthony, and Strand Magazine Critics’ Awards for Best First Novel. <

After the Lights Go Out (Hardcover)