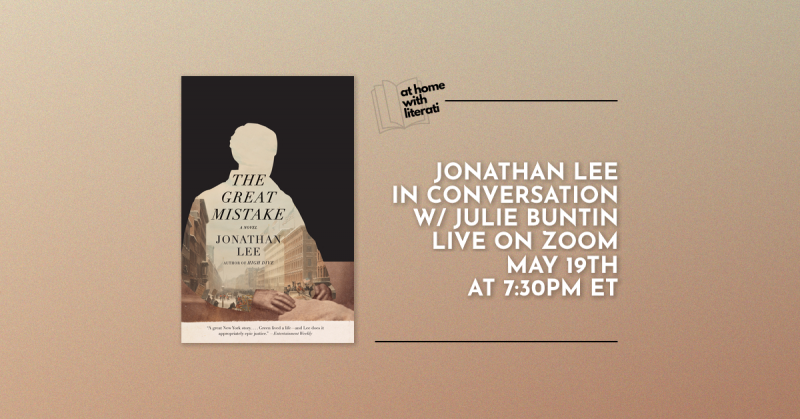 We're pleased to welcome Jonathan Lee to our At Home with Literati Series in support of The Great Mistake. He will be joined in conversation by Julie Buntin.

Click here to join the webinar event on 5/19. No pre-registration required!

An exultant novel of New York City at the turn of the twentieth century, about one man's rise to fame and fortune, and his mysterious murder--"engrossing" (Wall Street Journal), "immersive" (The New Yorker), and "seriously entertaining" (The Sunday Times, London).

Andrew Haswell Green is dead, shot at the venerable age of eighty-three, when he thought life could hold no more surprises. The killing--on Park Avenue in broad daylight, on Friday the thirteenth--shook the city.

Born to a struggling farmer, Green was a self-made man without whom there would be no Central Park, no Metropolitan Museum of Art, no Museum of Natural History, no New York Public Library. But Green had a secret, a life locked within him that now, in the hour of his death, may finally break free.

A work of tremendous depth and piercing emotion, The Great Mistake is the story of a city transformed, a murder that made a private man infamous, and a portrait of a singular individual who found the world closed off to him--yet enlarged it.

Jonathan Lee is the author of three novels, most recently High Dive, which was a best book of the year in publications including The New York Times, The Guardian, The Wall Street Journal, The Washington Post, and San Francisco Chronicle. He is the editor-in-chief of indie publisher Catapult. He lives in New York.

Julie Buntin grew up in northern Michigan. Her debut novel, Marlena, was a finalist for the National Book Critics Circle’s John Leonard Prize, translated into ten languages, and named a best book of the year by over a dozen outlets, including the Washington Post, NPR, and Kirkus Reviews. Her writing has appeared in the Atlantic, Vogue, the New York Times Book Review, Guernica, and elsewhere. She has received fellowships from Bread Loaf and the MacDowell Colony, and is an editor-at-large at Catapult. Her novel-in-progress won the 2019 Ellen Levine Fund for Writers Award. She teaches creative writing at the University of Michigan.

The Great Mistake: A novel (Paperback)