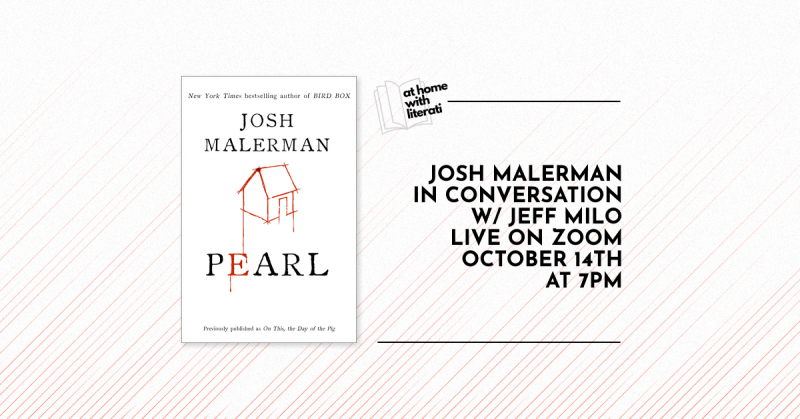 We're pleased to welcome Josh Malerman to our At Home with Literati Series in support of Pearl.

Click here to join the webinar event on 10/14. No pre-registration required!

About the book: From the New York Times bestselling author of Bird Box and Malorie, Josh Malerman, comes the legend of a strange new monster unlike any other in horror (previously published as On This, the Day of the Pig).

There's something strange about Walter Kopple's farm. At first it seems to be his grandson, who cruelly murders one of Walter's pigs in an act of seemingly senseless violence. But then the rumors begin--people in town whisper that Walter's grandson heard a voice that commanded him to kill.

And that the voice belongs to a most peculiar creature: Walter's pig, Pearl. Walter is not sure what to believe. He knows that he's always been afraid of the strangely malevolent Pearl. But as madness and paranoia grip the town and the townspeople descend on Walter's farm with violent wrath, they begin to discover that true evil wears a human face.

Josh Malerman is a New York Times bestselling author and one of two singer-songwriters for the rock band The High Strung. His debut novel, Bird Box, was the inspiration for the hit Netflix film of the same name. His other novels include Unbury Carol, Inspection, A House at the Bottom of a Lake, and Malorie, the sequel to Bird Box. Malerman lives in Michigan with his fiancée, the artist/musician Allison Laakko.

Jeff Milo is a music journalist who's covered the Michigan arts scene for 17 years and is a lifelong writer (halfway through his second book). He hosts and produces the podcast, A Little Too Quiet, where he regularly interviews authors about new works and the creative process. When he isn't coordinating media, marketing and events for the Ferndale Area District Library, he's a reporter at large for WDET's Culture Shift.