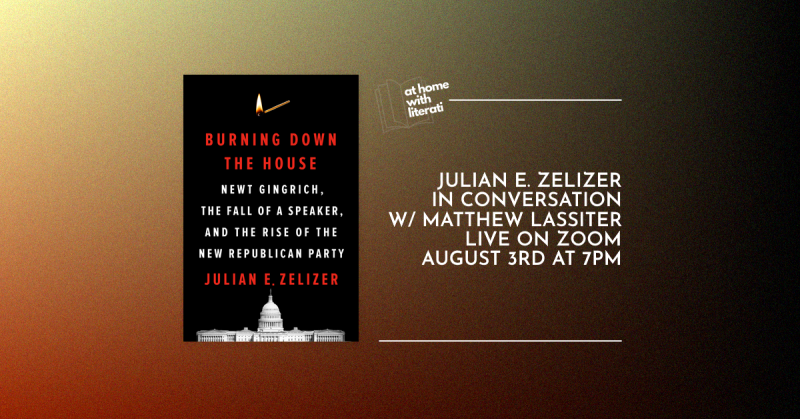 We're pleased to welcome Julian E. Zelizer to our At Home with Literati series of virtual events in support of his book, Burning Down the House: Newt Gingrich, The Fall of a Speaker, and the Rise of the New Republican Party. He'll be joined in conversation by University of Michigan professor Matthew Lassiter.

About the book: "With intensity and detail, Julian Zelizer recreates a drama that resounds in modern history. Most are well-acquainted with Newt Gingrich and his combative style, but here is the moment he transformed Congress and all of American politics." --Steve Kornacki, author of The Red and the Blue

"In this essential history of Newt Gingrich, Zelizer shows that Donald Trump isn't so much an innovator as an imitator. Zelizer argues that Gingrich wrote the modern Republican Party's destructive playbook, and the Democrats and the media have yet to figure out an effective response." --Jane Mayer, author of Dark Money and Chief Washington Correspondent, The New Yorker

Julian E. Zelizer is the Malcolm Stevenson Forbes, Class of 1941 Professor of History and Public Affairs at Princeton University and a CNN Political Analyst. His most recent books are Fault Lines: A History of the United States Since 1974 (co-authored with Kevin Kruse) and The Fierce Urgency of Now: Lyndon Johnson, Congress, and the Battle for the Great Society, the winner of the D.B. Hardeman Prize for Best Book on Congress. Zelizer has been awarded fellowships from the New York Historical Society, the Russell Sage Foundation, the Guggenheim Foundation, and New America.

Matt Lassiter is a scholar of the twentieth-century United States with a research and teaching focus on political history, urban/suburban studies, racial and social inequality, and the history of policing and the carceral state. His most recent book project, The Suburban Crisis: Crime, Drugs, and White Middle-Class America, is forthcoming from Princeton University Press.  He is on the steering committee of the U-M Carceral State Project and the co-PI of its Documenting Criminalization and Confinement research initiative.  He is also director of the Policing and Social Justice HistoryLab and coordinator of the Environmental Justice HistoryLab, each of which involves undergraduate student researchers in collaborative public engagement projects.

Burning Down the House: Newt Gingrich, the Fall of a Speaker, and the Rise of the New Republican Party (Hardcover)