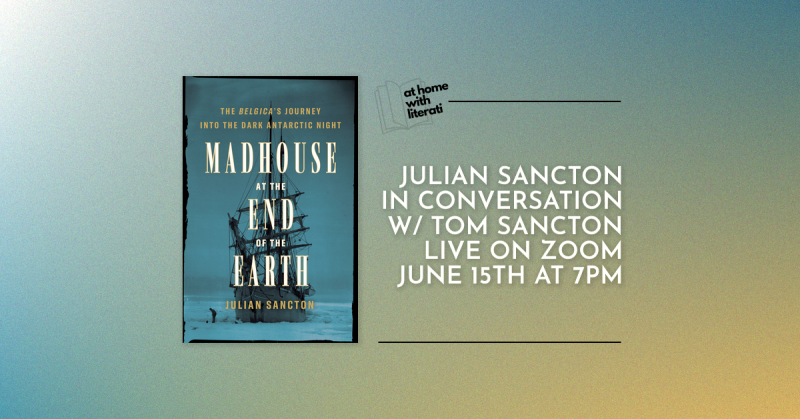 We're pleased to welcome Julian Sancton to our At Home with Literati Series in support of Madhouse at the End of the Earth. He'll be in conversation with his father, journalist and author Tom Sancton.

In MADHOUSE AT THE END OF THE EARTH, Sancton brilliantly captures the truly epic story of The Belgica. Mostly forgotten to history, this was one of the first polar expeditions to Antarctica at the end of the 19th century. The voyage was meant to bring fame to all aboard theship—and it certainly did, but at a very steep cost and not in quite the way the crew had imagined.

The Belgica would ultimately earn its fame as a harrowing survival story after the ship and her inhabitants—thanks to the deliberate decision of their captain—became trapped in the ice of the Bellingshausen sea. Surrounded on all sides by immovable sheets of ice, which threatened every day to crush the ship, the men of The Belgica were subjected to a months-long sentence of physical and mental anguish, becoming the first humans to confront the horrors of a completely sunless Antarctic winter.

Sancton brings this story to life in brilliant, novelistic detail using newly discovered first-hand accounts of the voyage and relying on exclusive access to the Belgica’s official logbook. Readers will bear witness to this unforgettable journey into the world’s most hostile environment and relive the lessons it taught the world about human extremes (those who do still remember The Belgica today are mainly the teams at NASA who study the lessons it offers on the physical and psychological limits of the human body as they look towards potential manned expeditions to Mars).

About the Author
Julian Sancton has been an editor at Vanity Fair, Esquire, and Departures, and written for such publications as The New Yorker, Wired, and Playboy. He has reported from every continent, including Antarctica, which he first visited while researching this book.

Tom Sancton is a journalist, author, and jazz musician. He grew up in New Orleans, graduated from Harvard, and took a doctorate in Modern History at Oxford University, which he attended as a Rhodes Scholar. He currently divides his time between Paris and New Orleans, where he has taught creative writing and is currently a Research Professor at Tulane University. As a journalist and author, Sancton has written extensively for such publications as TIME, Vanity Fair, Fortune, Reader’s Digest, L’Express, Le Point, Le Monde, Le Figaro, et al. During his 22-year stint as a writer, editor, and foreign correspondent for TIME, including 10 years as Paris Bureau Chief and Senior European Correspondent, Sancton wrote or reported more than 600 articles and 60 cover stories on subjects ranging from Pope John Paul II and the collapse of the Soviet Union, to jazz trumpeter Wynton Marsalis, the endangered planet Earth, and the future of French haute cuisine. He has also authored or co-authored seven books including his latest work, Sweet Land of Liberty: America in the Mind of the French left, 1848-1871 (LSU Press, 2021). In April 2022, Dutton will publish The Last Baron: The Paris Kidnapping that Brought Down a Dynasty.

Madhouse at the End of the Earth: The Belgica's Journey into the Dark Antarctic Night (Hardcover)