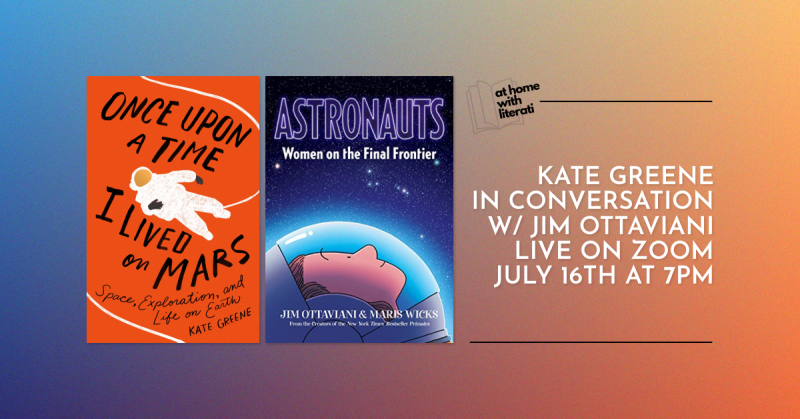 We're pleased to welcome Kate Greene to our At Home with Literati virtual event series in support of Once Upon A Time I Lived On Mars. She'll be joined in conversation by author Jim Ottaviani.

Note: meetings are now automatically password protected with wait rooms enabled. The password is entered automatically by clicking the link if you are logged into a Zoom account. We will let guests in off the waiting list shortly after 7pm EST and throughout the event. If you join late, hang in there, we'll let you in when we see you. Please keep your video disabled throughout the event.

About Once Upon A Time I Lived On Mars: When it comes to Mars, the focus is often on how to get there: the rockets, the engines, the fuel. But upon arrival, what will it actually be like? In 2013, Kate Greene moved to Mars. That is, along with five fellow crew members, she embarked on NASA’s first HI-SEAS mission, a simulated Martian environment located on the slopes of Mauna Loa in Hawai'i. For four months she lived, worked, and slept in an isolated geodesic dome, conducting a sleep study on her crew mates and gaining incredible insight into human behavior in tight quarters, as well as the nature of boredom, dreams, and isolation that arise amidst the promise of scientific progress and glory.
In Once Upon a Time I Lived on Mars, Greene draws on her experience to contemplate humanity’s broader impulse to explore. The result is a twined story of space and life, of the standard, able-bodied astronaut and Greene’s brother’s disability, of the lag time of interplanetary correspondences and the challenges of a long-distance marriage, of freeze-dried egg powder and fresh pineapple, of departure and return.

By asking what kind of wisdom humanity might take to Mars and elsewhere in the Universe, Greene has written a remarkable, wide-ranging examination of our time in space right now, as a pre-Mars species, poised on the edge, readying for launch.

Kate Greene was the crew writer and second-in-command on a simulated Mars mission for the NASA-funded HI-SEAS project. She is a former laser physicist, poet, and essayist whose work has appeared in Wired, The Economist, The Atlantic, The New Yorker, Slate, Discover, Science News, and other publications. She has taught writing at Vanderbilt University, San Francisco State University, and the Tennessee Prison for Women. She currently lives in New York City where she is a teaching fellow in the writing department at Columbia University.

Jim Ottaviani is the bestselling author of fourteen (and counting) graphic novels about scientists. His latest, Astronauts: Women on the Final Frontier, illustrated by Maris Wicks, features the first women astronauts. Others include Hawking, illustrated by Leland Myrick; The Imitation Game, a biography of Alan Turing illustrated by Leland Purvis; Primates, about Jane Goodall, Dian Fossey, and Biruté Galdikas with art by Maris Wicks; and Feynman, with Leland Myrick, a book about the Nobel-prize winning physicist, bongo-playing artist, and raconteur Richard Feynman which debuted as a #1 New York Times bestseller for graphic novels. His books have been translated into over a dozen languages and are probably the only ones to have received praise from both Nature and Vampirella Magazine…and everything in between, from Physics World to Entertainment Weekly to Discover to Variety to Time. He lives in Michigan and comes to comics via careers in nuclear engineering and librarianship. Find out more via his site at www.gt-labs.com and on Twitter at @gtlabsrat.

Once Upon a Time I Lived on Mars: Space, Exploration, and Life on Earth (Hardcover)