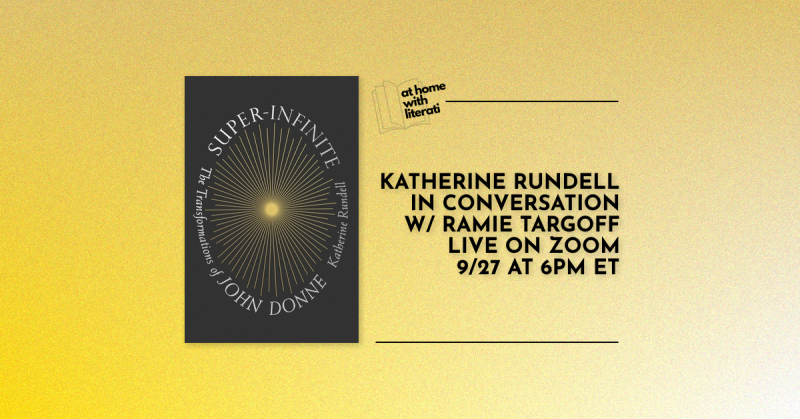 We're pleased to welcome Katherine Rundell to our At Home with Literati Series in support of Super-Infinite: The Transformations of John Donne. She will be joined in conversation by Ramie Targoff.

Click here to join the webinar event on 9/27. No pre-registration required!

From standout scholar Katherine Rundell, Super-Infinite presents a sparkling and very modern biography of John Donne: the poet of love, sex, and death.

In his myriad lives he was a scholar of law, a sea adventurer, a priest, an MP - and perhaps the greatest love poet in the history of the English language. Along the way he converted from Catholicism to Protestantism, was imprisoned for marrying a sixteen-year old girl without her father’s consent; struggled to feed a family of ten children; and was often ill and in pain. He was a man who suffered from black surges of misery, yet expressed in his verse many breathtaking impressions of electric joy and love.

Katherine Rundell is a Fellow of All Souls College, Oxford. Her bestselling books for children have been translated into more than thirty languages and have won multiple awards. Rundell is also the author of a book for adults, Why You Should Read Children's Books, Even Though You Are So Old and Wise, and writes occasionally for the London Review of Books, the Times Literary Supplement and the New York Times.

Ramie Targoff is the Jehuda Reinharz Professor of the Humanities, Professor of English, and Co-Chair of Italian Studies at Brandeis University, where she has been teaching since 2001.  She is the author of Common Prayer: Language and Devotion in Early Modern England (2001),  John Donne, Body and Soul (2008); and Posthumous Love: Eros and the Afterlife in Renaissance England (2014), all from University of Chicago Press; and Renaissance Woman: The Life of Vittoria Colonna (Farrar, Straus & Giroux, 2018).  She has also recently completed a translation of Vittoria Colonna’s 1538 Rime, entitled Sonnets of Widowhood, from ITER Press and part of the Other Voice in Early Modern Europe series of women’s writers. Targoff is the recipient of fellowships from the John Simon Guggenheim Memorial Foundation, the American Council of Learned Societies, the Wissenschaftskolleg zu Berlin, and she has been a Scholar in Residence at the American Academy in Rome. Her latest project, Shakespeare’s Sisters—a group biography of four women writers in Renaissance England—will be published in 2023 by Alfred K. Knopf in NY and Riverrun Press in London.  She has a BA in English from Yale University, and a PhD in English from University of California, Berkeley.