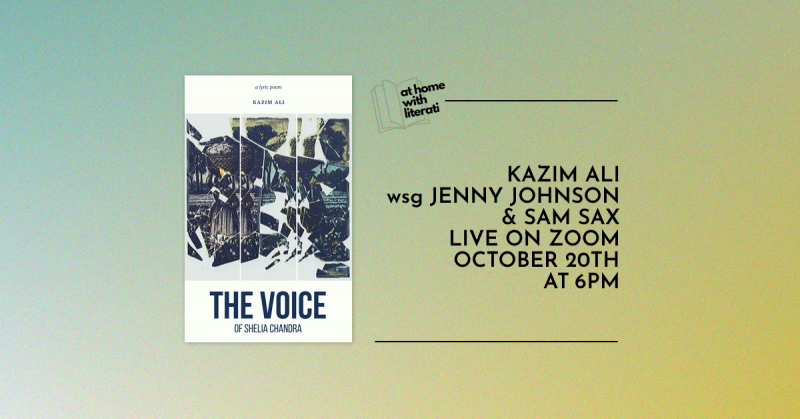 We're pleased to welcome Kazim Ali to our At Home with Literati Series in support of his recent collection The Voice of Sheila Chandra. He'll be joined by guest readers Jenny Johnson & sam sax.

"Kazim Ali's newest collection of poems is brilliant and chilling and filled with sound. The Voice of Sheila Chandra is alive with formal invention and innovation that will surely be a fixture in contemporary poetry for years to come. Part researched document, part song, part deep excavation of the soul, there is much to learn from this book. Ali forces us to contend with history & the present in order to imagine a future where we survive." --sam sax
Kazim Ali was born in the United Kingdom and has lived transnationally in the United States, Canada, India, France, and the Middle East. His books encompass multiple genres, including the volumes of poetry Inquisition, Sky Ward, winner of the Ohioana Book Award in Poetry; The Far Mosque, winner of Alice James Books’ New England/New York Award; The Fortieth Day; All One’s Blue; and the cross-genre texts Bright Felon and Wind Instrument. His novels include the recently published The Secret Room: A String Quartet and among his books of essays are the hybrid memoir Silver Road: Essays, Maps & Calligraphies and Fasting for Ramadan: Notes from a Spiritual Practice. He is also an accomplished translator (of Marguerite Duras, Sohrab Sepehri, Ananda Devi, Mahmoud Chokrollahi and others) and an editor of several anthologies and books of criticism. After a career in public policy and organizing, Ali taught at various colleges and universities, including Oberlin College, Davidson College, St. Mary's College of California, and Naropa University. He is currently a Professor of Literature at the University of California, San Diego. His newest books are a volume of three long poems entitled The Voice of Sheila Chandra and a memoir of his Canadian childhood, Northern Light.

Jenny Johnson is the author of In Full Velvet (Sarabande Books, 2017).  Her honors include a Whiting Award, a Hodder Fellowship at Princeton University, and a NEA Fellowship. Her poems have appeared in The New York Times, New England Review, Waxwing, and elsewhere. She is an Assistant Professor of Creative Writing at West Virginia University, and she is on the faculty of the Rainier Writing Workshop, Pacific Lutheran University’s low-residency MFA program. She lives in Pittsburgh with her cat named Shrimp!

sam sax is a queer, jewish, poet, & educator. He's the author of Madness (Penguin, 2017) winner of The National Poetry Series and ‘Bury It’ (Wesleyan University Press, 2018) winner of the James Laughlin Award from the Academy of American Poets. He’s received fellowships from the National Endowment for the Arts, Lambda Literary, & the MacDowell Colony. He’s the two-time Bay Area Grand Slam Champion, author of four chapbooks & winner of the Gulf Coast Prize, The Iowa Review Award, & American Literary Award. His poems have appeared in BuzzFeed, The New York Times, The Nation, Poetry Magazine + other journals. He’s the poetry editor at BOAAT Press & will be a Wallace Stegner Fellow at Stanford University this Fall.

The Voice of Sheila Chandra (Paperback)