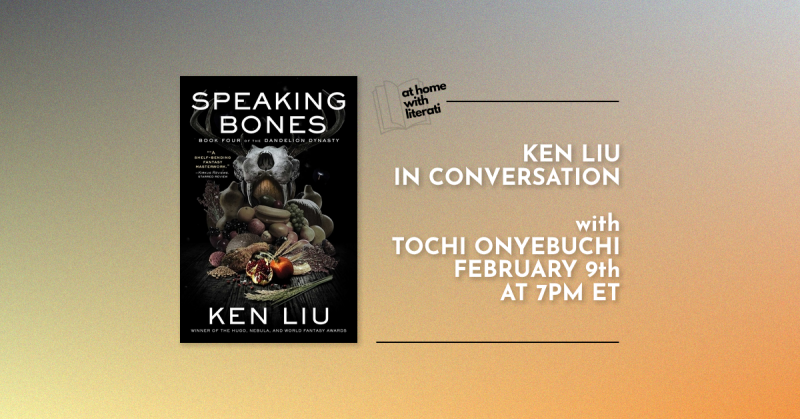 We're pleased to welcome Ken Liu to our At Home with Literati Series in support of Speaking Bones. He will be joined in conversation by Tochi Onyebuchi.

Click here to join the webinar event on 2/9. No pre-registration required!

The battle continues in this silkpunk fantasy as science and destiny collide against the will of the gods in this final installment in the epic Dandelion Dynasty series from the "genius" (Elizabeth Bear, Hugo Award--winning author of the Eternal Sky series) Hugo, Nebula, and World Fantasy Award-winning author Ken Liu.

The concluding book of The Dandelion Dynasty begins immediately after the events of The Veiled Throne, in the middle of two wars on two lands among three people separated by an ocean yet held together by the invisible strands of love.

Harried by Lyucu pursuers, Princess Théra and Pékyu Takval try to reestablish an ancestral dream even as their hearts grow in doubt. The people of Dara continue to struggle against the genocidal Lyucu as both nations vacillate between starkly contrasting visions for their futures. Even the gods cannot see through the Wall of Storms, for only mortal hearts can decide mortal fates.

Ken Liu is an award-winning American author of speculative fiction. His collection, The Paper Menagerie and Other Stories, has been published in more than a dozen languages. Liu's other works include The Grace of Kings, The Wall of Storms, The Veiled Throne, and a second collection The Hidden Girl and Other Stories. He has been involved in multiple media adaptations of his work including the short story "Good Hunting," adapted as an episode in Netflix's animated series Love, Death + Robots; and AMC's Pantheon, adapted from an interconnected series of short stories. "The Hidden Girl," "The Message," and "The Cleaners" have also been optioned for development. Liu previously worked as a software engineer, corporate lawyer, and litigation consultant. He frequently speaks at conferences and universities on topics including futurism, cryptocurrency, the history of technology, and the value of storytelling. Liu lives with his family near Boston, Massachusetts.

Tochi Onyebuchi is the author of Goliath. His previous fiction includes Riot Baby, a finalist for the Hugo, Nebula, Locus, and NAACP Image Awards and winner of the New England Book Award for Fiction, the Ignyte Award for Best Novella, and the World Fantasy Award; the Beasts Made of Night series; and the War Girls series. His short fiction has appeared in The Best American Science Fiction and Fantasy, The Year’s Best Science Fiction, and elsewhere. His non-fiction includes the book (S)kinfolk and has appeared in The New York Times, NPR, and the Harvard Journal of African American Public Policy, among other places. He has earned degrees from Yale University, New York University’s Tisch School of the Arts, Columbia Law School, and the Paris Institute of Political Studies. He currently resides in Connecticut.

The Grace of Kings (The Dandelion Dynasty #1) (Paperback)