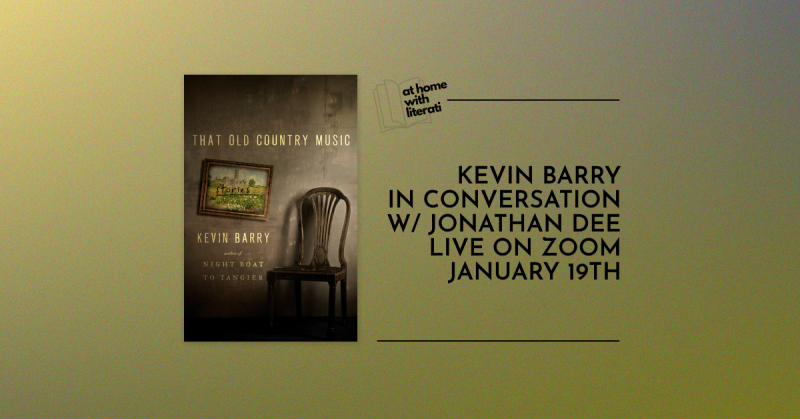 We're pleased to welcome Kevin Barry to our At Home with Literati virtual event series for an event in support of That Old Country Music. He'll be joined in conversation by author Jonathan Dee.

About the Book: From the author of the wildly acclaimed Night Boat to Tangier, one of the New York Times' 10 Best Books of 2019, stories of rural Ireland in the classic mode: full of love (and sex), melancholy and magic, bedecked in some of the most gorgeous prose being written today.

Kevin Barry is the author of the novels Night Boat to Tangier, Beatlebone, and City of Bohane and the story collections Dark Lies the Island and There Are Little Kingdoms. His awards include the IMPAC Dublin Literary Award, the Goldsmiths Prize, the Sunday Times EFG Short Story Prize and the Lannan Foundation Literary Award. His stories and essays appear in the New Yorker, Granta and elsewhere. He also works as a playwright and screenwriter, and he lives in County Sligo, Ireland.

Jonathan Dee is the author of six previous novels, most recently A Thousand Pardons. His novel The Privileges was a finalist for the 2010 Pulitzer Prize and winner of the 2011 Prix Fitzgerald and the St. Francis College Literary Prize. A former contributing writer for The New York Times Magazine, a senior editor of The Paris Review, and a National Magazine Award-nominated literary critic for Harper's, he has received fellowships from the National Endowment for the Arts and the Guggenheim Foundation. He lives in Syracuse, New York.
Event date:
Tuesday, January 19, 2021 - 7:00pm
Event address:
Live on your device

The Locals: A Novel (Paperback)