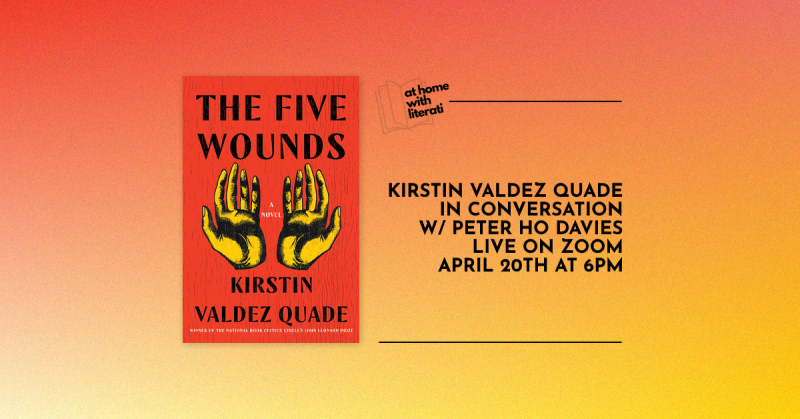 We're pleased to welcome Kirstin Valdez Quade to our At Home with Literati Series in support of The Five Wounds. She'll be joined in conversation by author Peter Ho Davies.

Purchase the book from us and be automatically entered into a raffle to win the special earrings pictured below! Winner will be announced at the event. 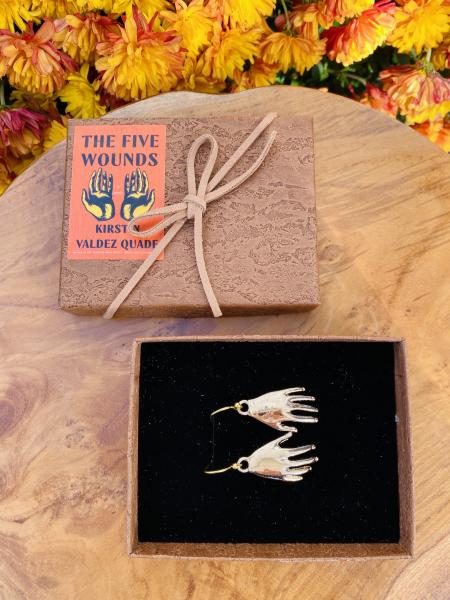 About the book: It's Holy Week in the small town of Las Penas, New Mexico, and thirty-three-year-old unemployed Amadeo Padilla has been given the part of Jesus in the Good Friday procession. He is preparing feverishly for this role when his fifteen-year-old daughter Angel shows up pregnant on his doorstep and disrupts his plans for personal redemption. With weeks to go until her due date, tough, ebullient Angel has fled her mother's house, setting her life on a startling new path.

Vivid, tender, funny, and beautifully rendered, The Five Wounds spans the baby's first year as five generations of the Padilla family converge: Amadeo's mother, Yolanda, reeling from a recent discovery; Angel's mother, Marissa, whom Angel isn't speaking to; and disapproving Tíve, Yolanda's uncle and keeper of the family's history. Each brings expectations that Amadeo, who often solves his problems with a beer in his hand, doesn't think he can live up to.

The Five Wounds is a miraculous debut novel from a writer whose stories have been hailed as "legitimate masterpieces" (New York Times). Kirstin Valdez Quade conjures characters that will linger long after the final page, bringing to life their struggles to parent children they may not be equipped to save.

Kirstin Valdez Quade is the author of The Five Wounds and Night at the Fiestas, winner of the National Book Critics Circle's John Leonard Prize. She is the recipient of a "5 Under 35" award from the National Book Foundation, the Rome Prize, and the Rona Jaffe Foundation Writer's Award. Her work has appeared in The New Yorker, New York Times, The Best American Short Stories, The O. Henry Prize Stories, and elsewhere. Originally from New Mexico, she now lives in New Jersey and teaches at Princeton University.

Peter Ho Davie's novel, The Fortunes, won the Anisfield-Wolf Award and the Chautauqua Prize and was a New York Times Notable Book of the Year. He is also the author of The Welsh Girl, long-listed for the Man Booker Prize and a London Times best-seller, as well as two critically acclaimed collections of short stories. His fiction has appeared in Harpers, the Atlantic, the Paris Review, and Granta and has been anthologized in Prize Stories: The O. Henry Awards and The Best American Short Stories.

The Five Wounds: A Novel (Hardcover)

Night at the Fiestas: Stories (Paperback)