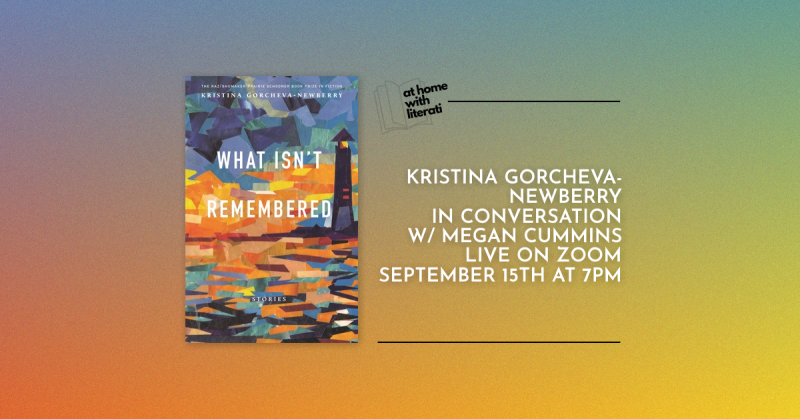 We're pleased to welcome Kristina Gorcheva-Newberry to our At Home with Literati Series in support of What Isn't Remembered. She'll be joined in conversation by Megan Cummins.

Click here to join the webinar event on 9/15. No pre-registration required!

Winner of the Raz/Shumaker Prairie Schooner Book Prize in Fiction, the stories in What Isn't Remembered explore the burden, the power, and the nature of love between people who often feel misplaced and estranged from their deepest selves and the world, where they cannot find a home. The characters yearn not only to redefine themselves and rebuild their relationships but also to recover lost loves--a parent, a child, a friend, a spouse, a partner.

A young man longs for his mother's love while grieving the loss of his older brother. A mother's affair sabotages her relationship with her daughter, causing a lifelong feud between the two. A divorced man struggles to come to terms with his failed marriage and his family's genocidal past while trying to persuade his father to start cancer treatments. A high school girl feels responsible for the death of her best friend, and the guilt continues to haunt her decades later.

Evocative and lyrical, the tales in What Isn't Remembered uncover complex events and emotions, as well as the unpredictable ways in which people adapt to what happens in their lives, finding solace from the most surprising and unexpected sources.

“...vibrant collection… lyrical and haunting… Throughout, the situations are arresting and the images indelible. Gorcheva- Newberry’s luminous prose will remain vivid in the reader’s mind.”
—PUBLISHERS WEEKLY (STARRED)
“...the book excels at juxtapositions without resolutions, that stretch and linger long after their stories are finished...The stories in What Isn’t Remembered run an emotional marathon. They are virtuosic, bold, and unsparing as they talk about “history and personal experiences, hunger and pain as [we continue] living through them, as though nothing ever ended but coexisted in parallel worlds.”
—FOREWORD REVIEWS (STARRED)
“In lyrical, evocative prose, [these] 16 substantial short stories explore themes of desire, absence, and loss… ...every reader who treasures powerful, surprising, and memorable short stories will find much to appreciate in this stunning first book.”
—BOOKLIST (STARRED)

Kristina Gorcheva-Newberry’s work has appeared in Electric Literature, Indiana Review, The Southern Review, Gulf Coast, TriQuarterly, Prairie Schooner, Nimrod, and elsewhere. Awards and honors include the Raz/Shumaker Prairie Schooner Book Prize for Fiction, the 2013 Katherine Anne Porter Prize for Fiction, the 2015 Tennessee Williams scholarship from the Sewanee Writers Conference. Her debut novel, The Orchard, will be published by Ballantine-Penguin/Random House in Spring, 2022. Gorcheva-Newberry lives with her family, splitting her time between Brooklyn, NY, Bland, VA, and Moscow.

Megan Cummins is a writer and editor living in Brooklyn. She is a graduate of the University of Michigan (BA), UC Davis (MA), and Rutgers-Newark (MFA). Her work has appeared in A Public Space, Guernica, One Teen Story, Ninth Letter, Okey-Panky, and elsewhere. Her debut story collection If the Body Allows It (Univ. of Nebraska Press) was awarded the 2019 Prairie Schooner Book Prize in Fiction and longlisted for the PEN/Robert W. Bingham Prize for Debut Short Story Collection. She is the managing editor of A Public Space and serves on the governing board of the Bare Life Review. Her next project is a YA novel called "Aerosol."