At Home with Literati: Lane Moore 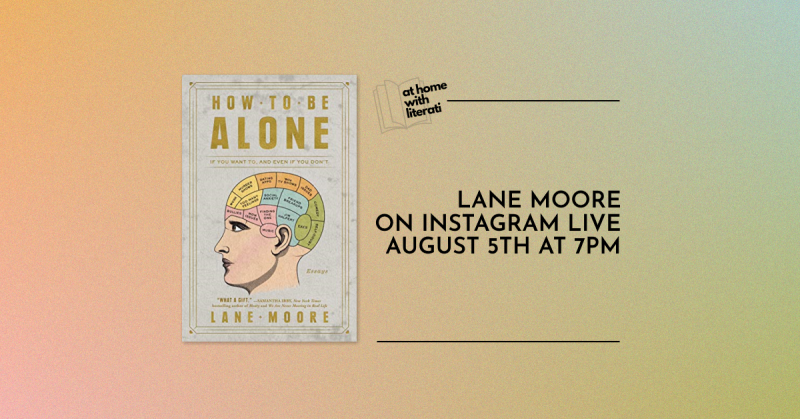 We're pleased to welcome Lane Moore to our At Home with Literati series of virtual events in support of How to Be Alone: If You Want To, and Even If You Don't.

About the book: The former Sex & Relationships Editor for Cosmopolitan and host of the wildly popular comedy show Tinder Live with Lane Moore presents her poignant, funny, and deeply moving first book.

How to Be Alone is a must-read for anyone whose childhood still feels unresolved, who spends more time pretending to have friends online than feeling close to anyone in real life, who tries to have genuine, deep conversations in a roomful of people who would rather you not. Above all, it's a book for anyone who desperately wants to feel less alone and a little more connected through reading her words.

Lane Moore is an award-winning comedian, writer, actor, and musician. The New York Times called her comedy show Tinder Live "ingenious." Her comedy and her band, It Was Romance, have been praised everywhere from Pitchfork to Vogue, and her writing has appeared everywhere from The New Yorker to The Onion. She is the former sex and relationships editor at Cosmopolitan, where she received a GLAAD Award for her groundbreaking work expanding the magazine's queer coverage. She lives in Brooklyn with her dog-child, Lights. You can follow Lane at @HelloLaneMoore on Instagram and Twitter or visit LaneMoore.org.

How to Be Alone: If You Want To, and Even If You Don't (Paperback)