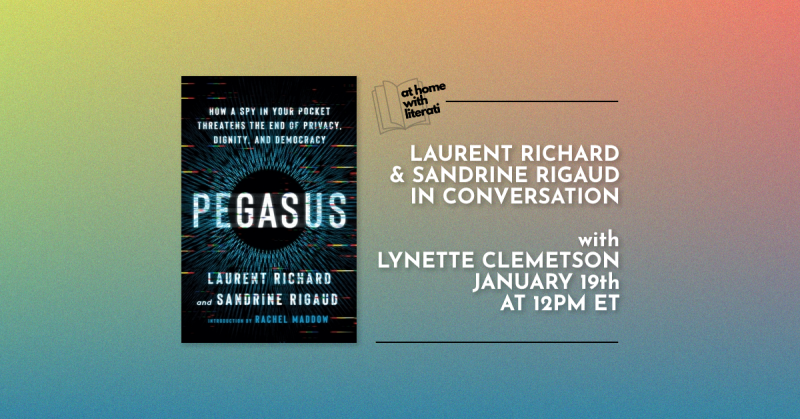 We're pleased to welcome Laurent Richard and Sandrine Rigaud to our At Home with Literati Series in support of Pegasus: How a Spy in Your Pocket Threatens the End of Privacy, Dignity, and Democracy. They will be joined in conversation by Lynette Clemetson.

Click here to join the webinar event on 1/19. No pre-registration required!

Featuring an introduction by Rachel Maddow, Pegasus: How a Spy in Our Pocket Threatens the End of Privacy, Dignity, and Democracy is the story of the one of the most sophisticated and invasive surveillance weapons ever created, used by governments around the world.

Pegasus is widely regarded as the most effective and sought-after cyber-surveillance system on the market. The system's creator, the NSO Group, a private corporation headquartered in Israel, is not shy about proclaiming its ability to thwart terrorists and criminals. "Thousands of people in Europe owe their lives to hundreds of our company employees," NSO's cofounder declared in 2019. This bold assertion may be true, at least in part, but it's by no means the whole story.

NSO's Pegasus system has not been limited to catching bad guys. It's also been used to spy on hundreds, and maybe thousands, of innocent people around the world: heads of state, diplomats, human rights defenders, political opponents, and journalists.

This spyware is as insidious as it is invasive, capable of infecting a private cell phone without alerting the owner, and of doing its work in the background, in silence, virtually undetectable. Pegasus can track a person's daily movement in real time, gain control of the device's microphones and cameras at will, and capture all videos, photos, emails, texts, and passwords--encrypted or not. This data can be exfiltrated, stored on outside servers, and then leveraged to blackmail, intimidate, and silence the victims. Its full reach is not yet known. "If they've found a way to hack one iPhone," says Edward Snowden, "they've found a way to hack all iPhones."

Pegasus is a look inside the monthslong worldwide investigation, triggered by a single spectacular leak of data, and a look at how an international consortium of reporters and editors revealed that cyber intrusion and cyber surveillance are happening with exponentially increasing frequency across the globe, at a scale that astounds.

Meticulously reported and masterfully written, Pegasus shines a light on the lives that have been turned upside down by this unprecedented threat and exposes the chilling new ways authoritarian regimes are eroding key pillars of democracy: privacy, freedom of the press, and freedom of speech.

Laurent Richard is a Paris-based award-winning documentary filmmaker who was named the 2018 European Journalist of the Year at the Prix Europa in Berlin. He is the founder of Forbidden Stories, a network of investigative journalists devoted continuing the unfinished work of murdered reporters to ensure the work they died for is not buried with them.

For more than twenty years Laurent Richard has been conducting major stories for television. He is the author of numerous investigations into the lies of the tobacco industry, the excesses of the financial sector, and the clandestine actions of Mossad and the CIA.

Since its creation, Forbidden Stories has received numerous awards, including a prestigious European Press Prize, two George Polk Awards, and a RSF Impact Prize for the Pegasus Project, published in 2021.

Sandrine Rigaud is a French investigative journalist. As editor of Forbidden Stories since 2019, she coordinated the award-winning Pegasus Project and the Cartel Project, an international investigation of assassinated Mexican journalists. Before joining Forbidden Stories, she directed feature-length documentaries for French television. She has reported from Tanzania, Uzbekistan, Lebanon, Qatar, and Bangladesh.

Lynette Clemetson is the Charles R. Eisendrath Director of Wallace House, home of the Knight-Wallace Fellowships for Journalists and the Livingston Awards for Young Journalists at the University of Michigan. She is a Knight-Wallace alum and came to the university from National Public Radio where she was Senior Director of Strategy and Content Initiatives, developing and guiding projects across broadcast, digital and events. Her career in journalism spans newspapers, magazines and audio across a range of platforms. As a reporter, she was a Washington-based correspondent for The New York Times and Newsweek, writing about politics, social issues and demographic change. Prior to her domestic correspondent work, she was an international correspondent for Newsweek based in Hong Kong, where she covered the former British colony’s return to Chinese rule in 1997. She moved into digital strategy and leadership in 2008 as the founding managing editor of the website TheRoot.com, launched for The Washington Post Company with Henry Louis Gates Jr.. She is also the former Director of Content Strategy at Pew Center on the States.

Pegasus: How a Spy in Your Pocket Threatens the End of Privacy, Dignity, and Democracy (Hardcover)