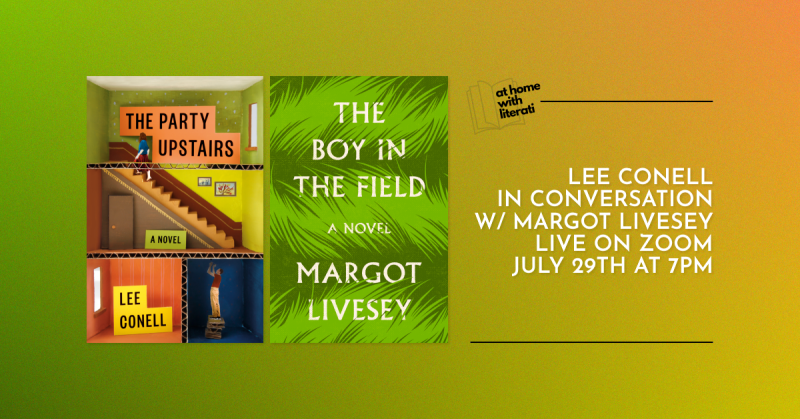 We're pleased to welcome Lee Conell to our At Home with Literati series of Virtual Events in support of The Party Upstairs. She'll be in conversation with author Margot Livesey.

About The Party Upstairs: Ruby has a strange relationship to privilege. She grew up the super's daughter in the basement of an Upper West Side co-op that gets more gentrified with each passing year. Though not economically privileged herself, her close childhood friendship with Caroline, the daughter of affluent tenants, and the mere fact of living in such a wealthy neighborhood, close to her beloved Natural History Museum, brought her certain advantages, even expectations. Naturally Ruby followed her dreams and took out loans to attend a prestigious small liberal arts college and explore her interest in art. But now, out of school for a while, she is no closer to her dream job, or anything resembling it, and she's been forced by circumstances to do the last thing she wanted to do: move back in with her parents, back into the basement. And Caroline is throwing one of her parties tonight, in her father's glorious penthouse apartment, a party Ruby looks forward to and dreads in equal measure.

With a thriller's narrative control, The Party Upstairs distills worlds of wisdom about families, great expectations, and the hidden violence of class into the gripping, darkly witty story of a single fateful day inside the Manhattan co-op Ruby calls home. Told from the alternating points of view of Ruby and her father, the novel builds from the spark of an early morning argument between them to the ultimate conflagration to which it leads by day's end. By the time the ashes have cooled, the façade that masks the building's power structure will have burned away, and no party will be left unscathed.

Lee Conell is the author of the story collection Subcortical, which was awarded The Story Prize’s Spotlight Award. Her short fiction has received the Chicago Tribune's Nelson Algren Award and appears in the Oxford American, Kenyon Review, Glimmer Train, American Short Fiction, and elsewhere. She is the recipient of creative writing fellowships from the Japan-United States Friendship Commission and the National Endowment for the Arts, the Tennessee Arts Commission, and the Sewanee Writers' Conference.

Margot Livesey was born and grew up on the edge of the Scottish Highlands. She has taught in numerous writing programs including Emerson College, Boston University, Bowdoin College and the Warren Wilson low residency MFA program, and is the author of a collection of stories and eight novels, including Eva Moves the Furniture, and The Flight of Gemma Hardy and The Hidden Machinery: Essays on Writing. She is the recipient of awards from the NEA, the Guggenheim Foundation and the Radcliffe Institute. She lives in Cambridge, MA with her husband, a painter, and is on the faculty of the Iowa Writers’ Workshop. Her ninth novel, The Boy in the Field will be published in August 2020.

The Party Upstairs: A Novel (Hardcover)

The Boy in the Field: A Novel (Hardcover)