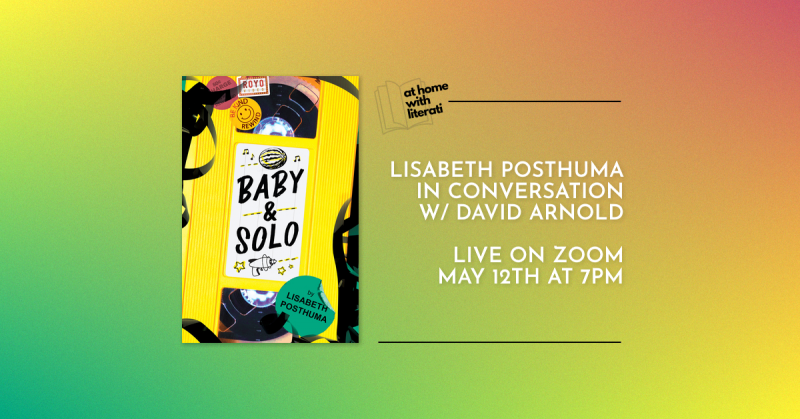 We're pleased to welcome Lisabeth Posthuma to our At Home with Literati Series in support of Baby & Solo. She'll be joined in conversation by David Arnold.

Joel's new job at the video store is just what the therapist ordered. But what happens if the first true friend he's made in years finds out about What Was Wrong With Him?

Seventeen-year-old Joel Teague has a new prescription from his therapist--a part-time job--the first step toward the elusive Normal life he's been so desperate to live ever since The Bad Thing happened. Lucky for Joel, ROYO Video is hiring. It's the perfect fresh start--Joel even gets a new name. Dubbed "Solo" after his favorite Star Wars character, Joel works his way up the not-so-corporate ladder without anyone suspecting What Was Wrong With Him. That is, until he befriends Nicole "Baby" Palmer, a smart-mouthed coworker with a chip on her shoulder about . . . well, everything, and the two quickly develop the kind of friendship movie montages are made of. However, when Joel's past inevitably catches up with him, he's forced to choose between preserving his new blank slate persona and coming clean--and either way, he risks losing the first real friend he's ever had. Set in a pop-culture-rich 1990s, this remarkable story tackles challenging and timely themes with huge doses of wit, power, and heart.

Lisabeth Posthuma is a devotee of obscure documentaries about drive-ins, a lover of rotary telephones, and a trophy-winning champion of TV trivia. She lives in Michigan with her two parakeets, Tiki Bon Jovi and Alaska Riggins.

David Arnold is the New York Times bestselling author of The Electric Kingdom, Mosquitoland, Kids of Appetite, and The Strange Fascinations of Noah Hypnotik, which has been optioned for film by Paramount. He has won the Southern Book Prize, the Great Lakes Book Award, and was named a Publishers Weekly Flying Start for his debut. His books have been translated into over a dozen languages. He lives in Lexington, Kentucky, with his wife and son.