At Home with Literati: Mark de Silva and Nicholas Rombes 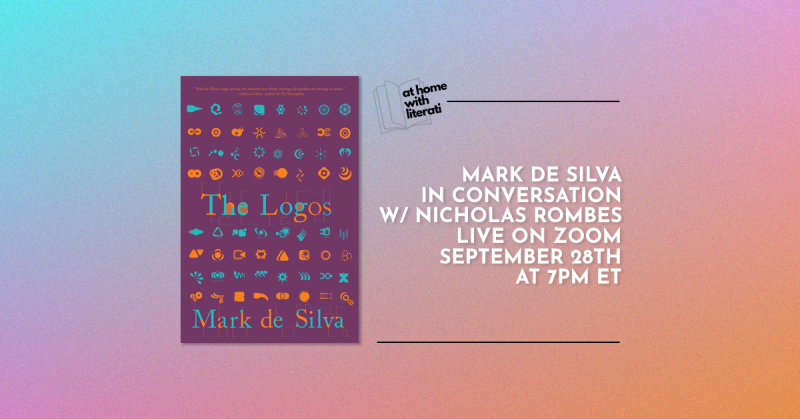 We're pleased to welcome Mark de Silva to our At Home with Literati Series in support of The Logos. He will be joined in conversation by Nicholas Rombes.

Click here to join the webinar event on 9/28. No pre-registration required!

In an epic new novel ranging across acting, advertising, professional sports, and the city, Mark de Silva offers up a grand meditation on the bitter glories of 21st century being, the human impulse to search for something original in the cacophony of a continuously replicating world, and the self-revelations living in our perception of others.

Jaded and adrift, a young painter in New York joins his fate to a mercurial titan of industry in the hopes of finding a new form—and quite possibly a new life. Cutting-edge intoxicants, the dance of desire, and a mysterious art magazine with unlimited ambitions all play a role on the ultimate stage, where only delusion can make the chase of mystique bearable.

Mark de Silva is the author of the novels Square Wave (Two Dollar Radio, 2016) and The Logos (Clash Books [US] and Splice [UK], 2022), as well as the essay collection Points of Attack (Clash Books, 2020). He holds degrees in philosophy from Brown (AB) and Cambridge (PhD). He is the fiction editor of 3:AM Magazine and a research editor at the New York Times Magazine.

Nicholas Rombes is author of the novels The Absolution of Roberto Acestes Laing (Two Dollar Radio) and The Rachel Condition (forthcoming from CLASH Books, 2023). His work has appeared in The Believer, The Oxford American, The Los Angeles Review of Books, and elsewhere. He is a professor of English at the University of Detroit Mercy.
Event address:
Live on your device
Books: