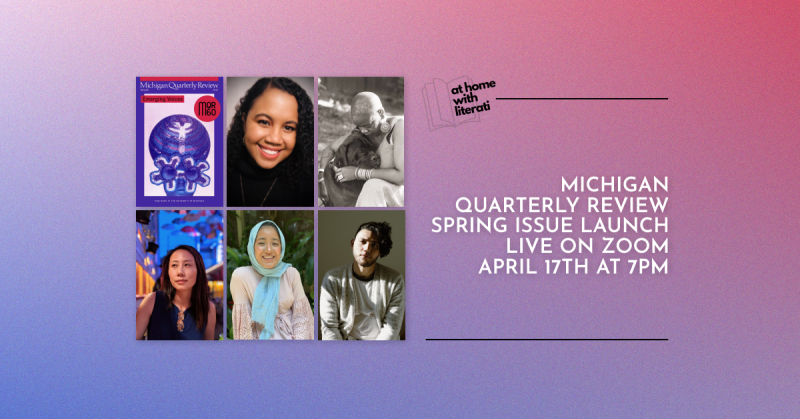 We're pleased to welcome contributors to the Michigan Quarterly Review's Spring 2021 Issue to celebrate its release.

RISË KEVALSHAR COLLINS studies creative writing at Boise State University, where she has also served on the editorial staff of Idaho Review.
She earned a BFA in Drama at Carnegie-Mellon University, and an MSW, with emphasis in political and clinical social work, at University of Houston.
Risë was a member of the original Broadway production of For Colored Girls Who Have Considered Suicide / When the Rainbow is Enuf by Notzake Shange. Rise’s play, Incandescent Tones, has been produced Off-Broadway and in repertory theatre. Her essays have appeared in Idaho Statesman, The Blue Review, Boise Weekly, Arbiter, and elsewhere. Her nonfiction was selected as a finalist for North American Review’s Terry Tempest Williams Prize. Recently, Risë was interviewed by Marcia Franklin and featured on the Idaho Public Television online series “The 180.”

DUJIE TAHAT is a Filipino-Jordanian immigrant living in Washington State. They are the author of Here I Am O My God, selected for a Poetry Society of America Chapbook Fellowship, and Salat, winner of the Tupelo Press Sunken Garden Chapbook Poetry Award. Their poems have been published in Poetry, Best New Poets, Poetry Northwest, and elsewhere. Along with Luther Hughes and Gabrielle Bates, they cohost The Poet Salon.
ANNELL LÓPEZ is a Dominican immigrant. A Tin House Scholarship Finalist, her work has appeared or is forthcoming in American Short Fiction,
Hobart, New Orleans Review, Cagibi, and elsewhere. Annell is an Assistant Fiction Editor for New Orleans Review. She is working on a collection of short
stories. Follow her: @annellthebookbabe on Instagram and @AnnellLopez2 on Twitter.
YUN WEI received her MFA in Poetry from Brooklyn College and studied at Georgetown University and London School of Economics. Her awards include the Geneva Literary Prizes and Himan Brown Poetry Fellowship. Her poetry and fiction appear in Shenandoah, Summerset Review, Poetry Northwest, Wigleaf, Word Riot, and other journals. She works in global health in Switzerland, where she relies on chocolate and tears to survive mountain sports. Find her at pomegranateway.blogspot.com
YASMEEN ALKISHAWI is a Palestinian-Venezuelan American Muslim. She holds a BA in Creative Writing from the University of South Florida. Her
work is forthcoming in Indiana Review, The Florida Review, and Peregrine.
Event date:
Saturday, April 17, 2021 - 7:00pm
Event address:
Live on your device