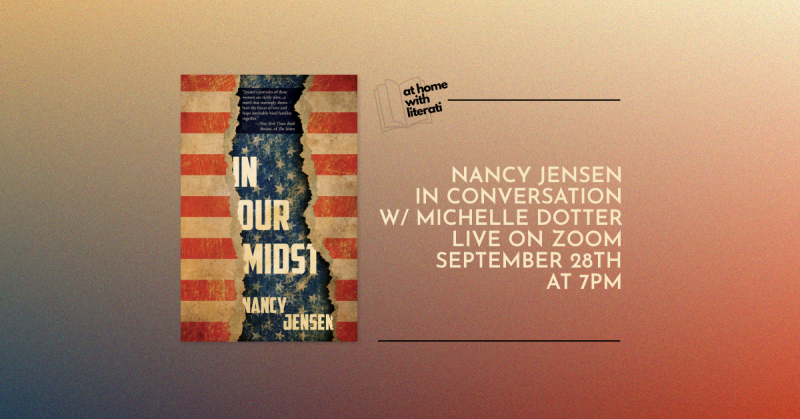 We're pleased to welcome Nancy Jensen to our At Home with Literati series of virtual events in support of In Our Midst. She'll be in conversation with the book's editor and Publisher and Editor-in-Chief of Dzanc Books, Michelle Dotter.

About the book: Drawing upon a long-suppressed episode in American history, when thousands of German immigrants were rounded up and interned following the attack on Pearl Harbor, In Our Midst tells the story of one family’s fight to cling to the ideals of freedom and opportunity that brought them to America.

Nina and Otto Aust, along with their teenage sons, feel the foundation of their American lives crumbling when, in the middle of the annual St. Nikolas Day celebration in the Aust Family Restaurant, their most loyal customers, one after another, turn their faces away and leave without a word. The next morning, two FBI agents seize Nina by order of the president, and the restaurant is ransacked in a search for evidence of German collusion.

Ripped from their sons and from each other, Nina and Otto are forced to weigh increasingly bitter choices to stay together and stay alive. Recalling a forgotten chapter in history, In Our Midst illuminates a nation gripped by suspicion, fear, and hatred strong enough to threaten all bonds of love—for friends, family, community, and country.

Nancy Jensen’s best-selling novel The Sisters was selected by the Independent Booksellers Association as a #1 Indie Next Pick, and included by Kirkus Reviews on its list for Best Fiction of 2011.  She has been awarded an Artist Enrichment Grant from the Kentucky Foundation for Women and an Al Smith Fellowship from the Kentucky Arts Council.  Her first book, Window: Stories and Essays, was published by Fleur-de-Lis Press in 2009.  She teaches in the Bluegrass Writers Studio at Eastern Kentucky University and shares her home with five rescued cats.

Michelle Dotter is the publisher and editor-in-chief of Dzanc Books, a nonprofit literary publisher. She earned a degree in Creative Writing from Colorado College before beginning her editing career with MacAdam/Cage Publishing in San Francisco. Before coming to Dzanc, she also worked with MP Publishing, Cameron + Company, Once Magazine, and myriad independent authors across all aspects of the editing process, from content and copy edits to proofreads. She has worked with New York Times bestselling authors, along with winners of the National Book Award, the Whiting Award, the National Book Critics Circle Award, and recipients of other honors.

In Our Midst (Hardcover)

The Sisters: A Novel (Paperback)