At Home with Literati: Nick McDonell 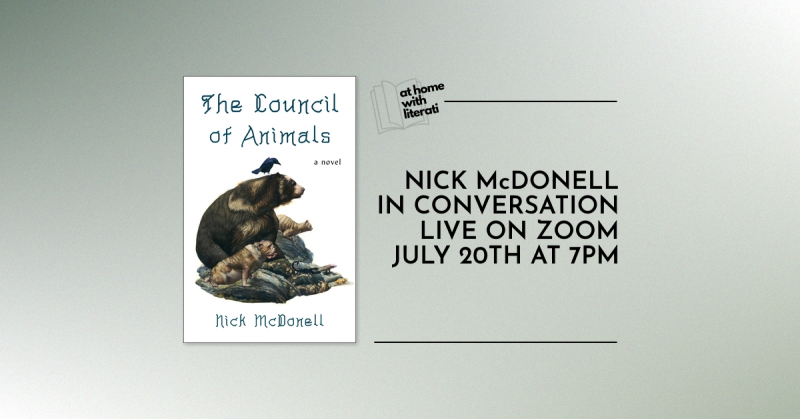 We're pleased to welcome Nick McDonell to our At Home with Literati Series in support of The Council of Animals. He'll be joined in conversation by author Cathleen Schine.

About the book: From national bestselling author Nick McDonell, The Council of Animals is a captivating fable for humans of all ages--dreamers and cynics alike--who believe (if nothing else) in the power of timeless storytelling.

After The Calamity, the animals thought the humans had managed to do themselves in. But, it turns out, a few are cowering in makeshift villages. So the animals--among them a cat, a dog, a crow, a baboon, a horse, and a bear--have convened to debate whether to help the last human stragglers . . . or to eat them.

Nick McDonell, born in 1984, is a writer of novels, journalism, and political theory. He studied literature at Harvard and international relations at St. Anthony's College, Oxford. His fiction has been published in twenty-two languages and appeared on bestseller lists around the world. A film adaptation of his first novel, Twelve, premiered at the Sundance Film Festival in 2010. His academic work on nomadism-- The Civilization of Perpetual Movement--was published in 2016. As a reporter for the London Review of Books, Time, TheNewYorker.com, and Harper's, Nick has embedded with the United States Army and Marines, the Afghan Special Forces, the African Union Mission to Darfur, and the Iraqi Special Forces. Nick's last book, The Bodies in Person: An Account of Civilian Casualties in American Wars, was published in 2018. Nick is a cofounder of the Zomia Center for the Study of Non-State Spaces, which supports scholarly and humanitarian projects around the world.

Cathleen Schine is the author of the internationally best-selling novels The Love Letter, which was made into a movie starring Kate Capshaw, and Rameau’s Niece, which was also made into a movie (The Misadventures of Margaret), starring Parker Posey. Schine’s other novels are Alice in Bed, To the Bird House, The Evolution of Jane, She is Me, The New Yorkers, The Three Weissmanns of Westport, Fin & Lady, They May Not Mean To, But They Do, and her new novel coming out September 2019, The Grammarians. In addition to novels she has written articles for The New Yorker, The New York Review of Books, The New York Times Sunday Magazine, and The New York Times Book Review, among other publications. Her essays have been included in Best American Essays 2005, Fierce Pajamas, an Anthology of New Yorker Humor, and The Big New Yorker Book of Dogs. She grew up in Westport, Ct. And lives in Venice, California.

The Council of Animals: A Novel (Hardcover)