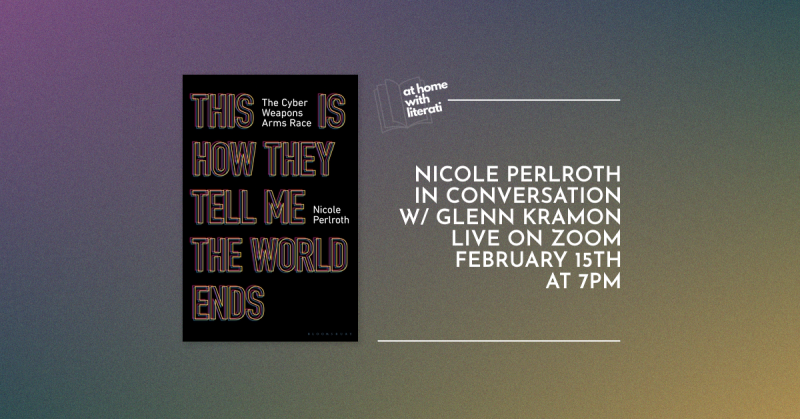 We're pleased to welcome Nicole Perlroth in support of This Is How They Tell Me the World Ends. She'll be in conversation with Glenn Kramon, an editor at The New York Times.

About the book: From The New York Times cybersecurity reporter Nicole Perlroth, the untold story of the cyberweapons market-the most secretive, invisible, government-backed market on earth-and a terrifying first look at a new kind of global warfare.

Zero day: a software bug that allows a hacker to break into your devices and move around undetected. One of the most coveted tools in a spy's arsenal, a zero day has the power to silently spy on your iPhone, dismantle the safety controls at a chemical plant, alter an election, and shut down the electric grid (just ask Ukraine).

For decades, under cover of classification levels and non-disclosure agreements, the United States government became the world's dominant hoarder of zero days. U.S. government agents paid top dollar-first thousands, and later millions of dollars- to hackers willing to sell their lock-picking code and their silence.

Then the United States lost control of its hoard and the market.

Now those zero days are in the hands of hostile nations and mercenaries who do not care if your vote goes missing, your clean water is contaminated, or our nuclear plants melt down.

Filled with spies, hackers, arms dealers, and a few unsung heroes, written like a thriller and a reference, This Is How They Tell Me the World Ends is an astonishing feat of journalism. Based on years of reporting and hundreds of interviews, The New York Times reporter Nicole Perlroth lifts the curtain on a market in shadow, revealing the urgent threat faced by us all if we cannot bring the global cyber arms race to heel.

Nicole Perlroth is an award-winning cybersecurity journalist for The New York Times, where her work has been optioned for both film and television. She is a regular lecturer at the Stanford Graduate School of Business and a graduate of Princeton University and Stanford University. She lives with her family in the Bay Area, but increasingly prefers life off the grid in their cabin in the woods.
Glenn Kramon has been an editor for The New York Times for more than a quarter-century. Reporters whom he has supervised and edited have won 10 Pulitzer Prizes, and have been finalists for the Pulitzer 25 times.  His projects have included series about the overlooked problem of concussions among young athletes;the dangers of distracted driving; the safety and environmental hazards of sport utility vehicles and pickup trucks; cheating on taxes, and loopholes and inequities in the tax code; medical treatments used despite a lack of evidence that they work; the myths and truths about genetically modified foods; the ways the United States is and is not moving toward a more secure energy future, and environmental devastation in China. He also introduced a system to ensure that Times editors become good managers, and authored a handbook on running the newsroom. Earlier he served as business editor of The Times, and wrote about the business of health care and health insurance.
Event date:
Monday, February 15, 2021 - 7:00pm
Event address:
Live on your device

This Is How They Tell Me the World Ends: The Cyberweapons Arms Race (Hardcover)