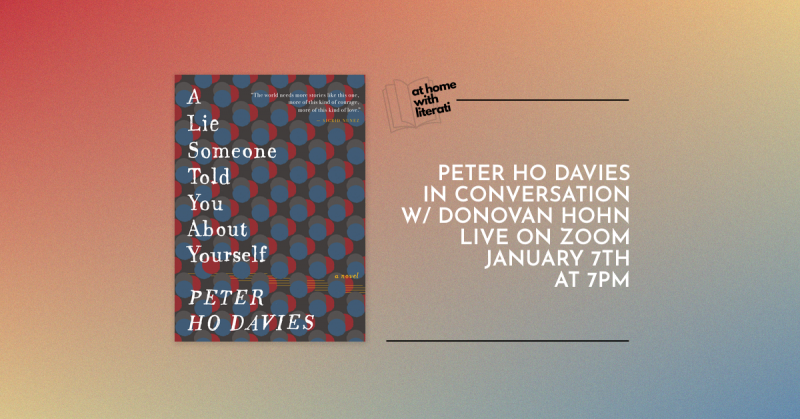 We're pleased to welcome Peter Ho Davies to our At Home with Literati virtual event series for an event in support of A Lie Someone Told You About Yourself. He'll be in conversation with Donovan Hohn.

A Lie Someone Told You About Yourself traces the complex consequences of one of the most personal yet public, intimate yet political experiences a family can have: to have a child, and conversely, the decision not to have a child. A first pregnancy is interrupted by test results at once catastrophic and uncertain. A second pregnancy ends in a fraught birth, a beloved child, the purgatory of further tests--and questions that reverberate down the years.

PETER HO DAVIES' novel, The Fortunes, won the Anisfield-Wolf Award and the Chautauqua Prize and was a New York Times Notable Book of the Year. He is also the author of The Welsh Girl, long-listed for the Man Booker Prize, and a London Times Best Seller, as well as two critically acclaimed collections of short stories. His fiction has appeared in Harpers, The Atlantic, The Paris Review and Granta and been anthologized in Prize Stories: The O. Henry Awards and Best American Short Stories.