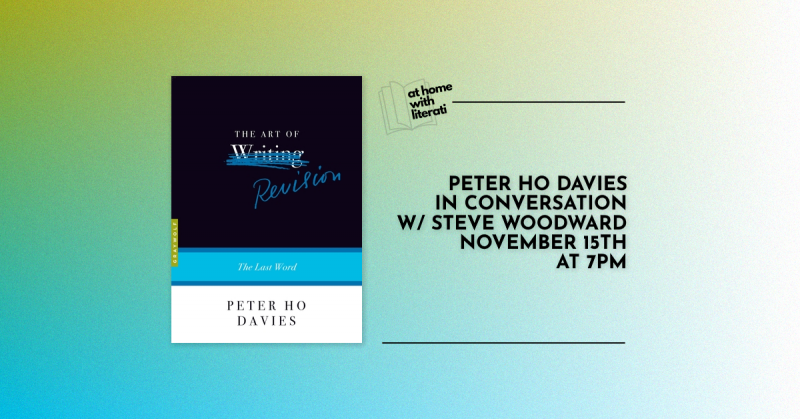 We're pleased to welcome Peter Ho Davies to our At Home with Literati Series in support of The Art of Revision. They will be joined in conversation by former Graywolf editor Steve Woodward.

Click here to join the webinar event on 11/15. No pre-registration required!

About the book: The fifteenth volume in the Art of series takes an expansive view of revision--on the page and in life.

In The Art of Revision: The Last Word, Peter Ho Davies takes up an often discussed yet frequently misunderstood subject. He begins by addressing the invisibility of revision--even though it's an essential part of the writing process, readers typically only see a final draft, leaving the practice shrouded in mystery. To combat this, Davies pulls examples from his novels The Welsh Girl and The Fortunes, as well as from the work of other writers, including Flannery O'Connor, Carmen Machado, and Raymond Carver, shedding light on this slippery subject.

Davies also looks beyond literature to work that has been adapted or rewritten, such as books made into films, stories rewritten by another author, and the practice of retconning in comics and film. In an affecting frame story, Davies recounts the story of a violent encounter in his youth, which he then retells over the years, culminating in a final telling at the funeral of his father. In this way, the book arrives at an exhilarating mode of thinking about revision--that it is the writer who must change, as well as the writing. The result is a book that is as useful as it is moving, one that asks writers to reflect upon themselves and their writing.

Peter Ho Davies is the author of three novels, including A Lie Someone Told You About Yourself, and two story collections. The winner of the Anisfield-Wolf Award and the PEN/Malamud Prize, he teaches at the University of Michigan and lives in Ann Arbor.

Steve Woodward is a writer and former editor at Graywolf Press. Authors he's edited have won the Booker Prize, the NBCC Award, and the International Dublin Literary Award, and have been finalists for the Pulitzer Prize and the National Book Award. He teaches publishing and creative writing at Macalester College, the University of St. Benedict, and Sierra Nevada University, and has an MFA from the University of Michigan. He lives in Brooklyn Park, Minnesota.

The Art of Revision: The Last Word (Art of...) (Paperback)