At Home with Literati: Peter Mendelsund 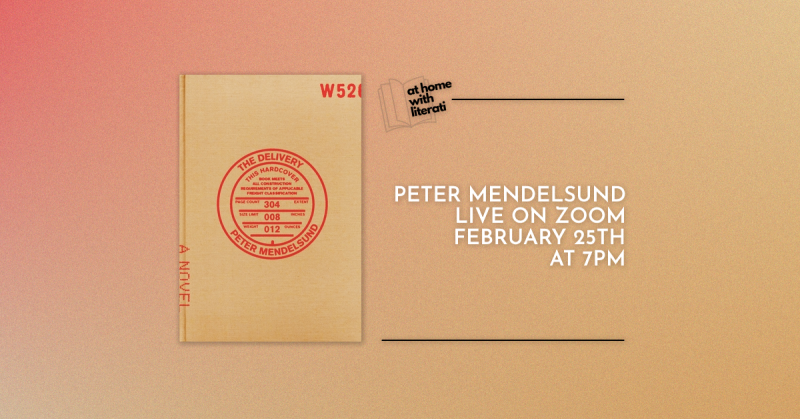 We're pleased to welcome Peter Mendelsund in support of The Delivery. He'll be in conversation with author Jane Mendelsohn.

About the book: Enter the world of the Delivery Boy, who must peddle his way to 5-star customer ratings--and, perhaps, freedom--in novelist and graphic designer Peter Mendelsund's The Delivery.

Countries go wrong, sometimes, and sometimes the luckier citizens of those countries have a chance to escape and seek refuge in another country--a country that might itself be in the process of going wrong.

In the bustling indifference of an unnamed city, one such citizen finds himself trapped working for a company that makes its money dispatching an army of undocumented refugees to bring the well-off men and women of this confounding metropolis their dinners. Whatever he might have been at home, this citizen is now a Delivery Boy: member of a new and invisible working class, pedaling his power-assist bike through traffic hoping for a decent tip and a five star rating.

He is decidedly a Delivery Boy; sometimes he even feels like a Delivery Baby; certainly he's not yet a Delivery Man, though he'll have to man-up if he wants to impress N.--the aloof dispatcher who sends him his orders and helps him with his English.

Can our hero avoid the wrath of his Supervisor, get the girl, and escape his indentured servitude? Can someone in his predicament ever get a happy ending? Who gets to decide? And who's telling this story, anyway?

Harrowing and hilarious, The Delivery is a fable for and about our times: an exploration of the ways language and commerce unites and isolates every one of us, native and immigrant both.

Peter Mendelsund is a novelist, a graphic designer, and the creative director of The Atlantic. Mendelsund is the author of several books about literature and the visual imagination: What We See When We Read, Cover, and The Look of the Book: Jackets, Covers, and Art at the Edges of Literature. His debut novel, Same Same, was published in 2019.

Jane Mendelsohn is the author of four novels: I Was Amelia Earhart, a New York Times best seller and a finalist for the Orange Prize; Innocence; American Music; and Burning Down the House. A graduate of Yale, she lives in New York City with her husband and children.

The Delivery: A Novel (Hardcover)