At Home with Literati: Phil Christman and Raechel Anne Jolie 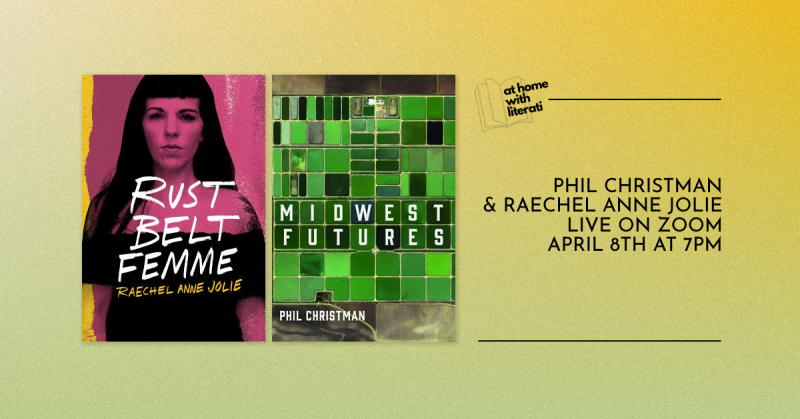 We're pleased to welcome U of M lecturer Phil Christman and writer and Educator Raechel Anne Jolie in support of Midwest Futures and Rust Belt Femme, respectively, as part of our At Home with Literati series of virtual events!

Note: Zoom meetings are now automatically password protected with wait rooms enabled. The password is entered automatically by clicking the link if you are logged into a Zoom account. We will let guests in off the waiting list shortly after 7 and throughout the event. If you join late, hang in there, we'll let you in when we see you.

About Midwest Futures: What does the future hold for the Midwest? A vast stretch of fertile farmland bordering one of the largest concentrations of freshwater in the world, the Midwestern US seems ideally situated for the coming challenges of climate change. But it also sits at the epicenter of a massive economic collapse that many of its citizens are still struggling to overcome. The question of what the Midwest is (and what it will become) is nothing new. As Phil Christman writes in this idiosyncratic new book, ambiguity might be the region's defining characteristic. Taking a cue from Jefferson's grid, the famous rectangular survey of the Old Northwest Territory that turned everything from Ohio to Wisconsin into square-mile lots, Christman breaks his exploration of Midwestern identity, past and present, into 36 brief, interconnected essays. The result is a sometimes sardonic, often uproarious, and consistently thought-provoking look at a misunderstood place and the people who call it home.

About Rust Belt Femme: Raechel Anne Jolie's early life in a working-class Cleveland exurb was full of race cars, Budweiser-drinking men covered in car grease, and the women who loved them. After her father came home from his third-shift job, took the garbage out to the curb and was hit by a drunk driver, her life changed. Raechel and her mother struggled for money: they were evicted, went days without utilities, and took their trauma out on one another. Raechel escaped to the progressive suburbs of Cleveland Heights, leaving the tractors and ranch-style homes home in favor of a city with vintage marquees, music clubs, and people who talked about big ideas. It was the early 90s, full of Nirvana songs and chokers, flannel shirts and cut-off jean shorts, lesbian witches and local coffee shops. Rust Belt Femme is the story of how these twin foundations--rural Ohio poverty and alternative 90s culture--made Raechel into who she is today: a queer femme with PTSD and a deep love of the Midwest.

A former substitute teacher, shelter worker, and home health aide, Phil Christman currently lectures in the English department at the University of Michigan. His work has appeared in The Hedgehog Review, Commonweal, The Christian Century, The Outline, and other places. He holds an MFA from the University of South Carolina-Columbia. He is the editor of the Michigan Review of Prisoner Creative Writing, a journal sponsored by the University of Michigan's Prison Creative Arts Project. He lives in Ann Arbor, MI.

Raechel Anne Jolie is a writer, educator, and media maker. Raechel received her PhD in Communication Studies with a minor in Gender & Sexuality Studies from the University of Minnesota. Her writing has been published in numerous academic journals as well as various popular press sites ( Teen Vogue, Bitch Magazine, In These Times, and more). You can find her @reblgrrlraechel or at www.raechelannejolie.com. She lives in Minneapolis, MN.