At Home with Literati: Radical Humility 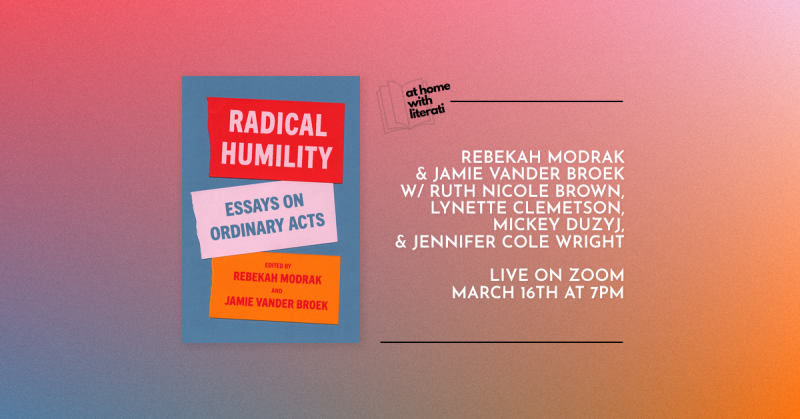 We're pleased to welcome editors of and contributors to Radical Humility: Essays on Ordinary Acts to our At Home with Literati Series.

About the book: What does humility mean and why does it matter in an age of golden escalators and billionaire entrepreneurs? How can the cultivation of humility empower us to see success in failure, to fight against injustice, to stretch beyond our usual ways of thinking, and to foster a culture of listening in an age of digital shouting? With contributions from renowned scholars as well as psychologists, artists, and many others, Radical Humility: Essays on Ordinary Acts offers guidance.

Edited by Rebekah Modrak and Jamie Vander Broek, Radical Humility explores what we can learn from philosophers about why Socrates chose to question everyone--even the Oracle who proclaimed him to be the wisest of men. New York Times columnist Charles M. Blow examines the corrosive effect of Donald Trump's arrogance on our democracy. Artist Ruth Nicole Brown describes lessons learned from her aunt about living a life of "you before me," and how this informed her work celebrating Black girls. Journalist Lynette Clemetson lays out the conflicts for journalists trained to recede into the background but now urged to be social media presences. And scholars Aric Rindfleisch and Nadia Danienta describe why maker cultures are as good at celebrating failure as they are at championing success.

Having witnessed the personal and civic costs of narcissism and arrogance, these and other writers consider humility as a valuable process--a state of being--with the power to impact institutions, systems, families, and individuals, and give voice to the ways in which humility is practiced in many ordinary but extraordinary actions.

Ruth Nicole Brown is an artist-scholar whose life work is dedicated to the celebration of Black girlhood. The Inaugural Chairperson of African American and African Studies at Michigan State University, her study of Black girlhood emerges from over a decade of practice- face to face conversations, rituals of dance and movement, and active relationship building with Black girls and women in Saving Our Lives Hear Our Truths which is lovingly referred to by the acronym SOLHOT.  Author of Black Girlhood Celebration: Toward A Hip-Hop Feminist Pedagogy and Hear Our Truths: The Creative Potential of Black Girlhood, Ruth Nicole was awarded the Whiting Public Engagement Fellowship for SOLHOT’s premier project, Black Girl Genius Week.

Lynette Clemetson is a longtime journalist who loves helping reporters do their best work. She's worked in print in digital, in magazines, newspapers and radio, in the field and as a manager. As director of the Knight-Wallace Fellowships for Journalists and the Livingston Awards at the University of Michigan, she works to develop the careers of accomplished journalists from around the world who work in every medium on every platform. A former reporter for Newsweek and The New York Times and a former manager at NPR, she is a fierce defender of press freedom. She believes there is an incredible amount of important, impactful, innovative reporting being done now... if only people (herself included) could stop scrolling long enough to absorb more of it.

Mickey Duzyj is an artist & director known for his innovative use of animation in documentary film. He was chosen by Variety Magazine as one of 2019’s “Top 10 Documentary Filmmakers to Watch” and is the creator/director of the critically-acclaimed Netflix documentary series LOSERS (2019). He lives in upstate New York with his wife and 2 boys.

Rebekah Modrak is a writer and artist whose interventionist artworks resist consumer culture. Re Made Co. (remadeco.org) poses as an online “company” promoting $350 artisanal toilet plungers to parody actual company Best Made Co., seller of $350 luxury hand-painted axes. RETHINK SHINOLA (rethinkshinola.com) guides viewers through the Shinola company’s past and present of marketing White supremacy. You can read her thoughts about culture jamming and reclaiming meaning from brand rhetoric in such publications as The Routledge Companion to Criticality in Art, Architecture and Design, Afterimage, Consumption Markets & Culture, Ms. Magazine, and The Conversation.

Jamie Vander Broek is an art librarian at the University of Michigan. She buys all kinds of art and design and artists’ books for her library and runs a book arts studio where you can learn to print with metal type and make books by hand. A few years ago, she bought a book made of cheese for her library. You can read her essay about it on saveur.com. She holds a tailored Master’s degree from the U-M School of Information in Art and Art Museum Librarianship, and received a B.A. in Art History with a minor in Italian Studies from Wellesley College. Since arriving in Ann Arbor, she has been active in the local art and book communities, and is currently on the board of the Ann Arbor District Library. She lives in a constantly under-construction house with her husband, daughter, and two out-of-control Miniature Australian Shepherds.

Jennifer Cole Wright is Professor of Psychology at the College of Charleston, USA. Her area of research is moral development and moral psychology more generally. She is interested in how moral values and norms develop over time and influence people’s reactions to divergent beliefs and practices in pluralistic societies—and, in particular, the influence of individual and social “liberal vs. conservative” mindsets on those reactions. She is also interested in why we care about being “good people” and how we become them. In particular, she studies humility and the development of virtue, as well as young children’s early moral development. She has published papers on these and other topics in journals like Cognition, Mind & Language, Journal of British Developmental Psychology, Journal of Experimental Social Psychology, Philosophical Psychology, Journal of Cognition and Culture, and Personality and Individual Differences. She has published a book, Understanding Virtue: Theory and Measurement, with Nancy Snow and Michael Warren (Oxford Press, 2020).