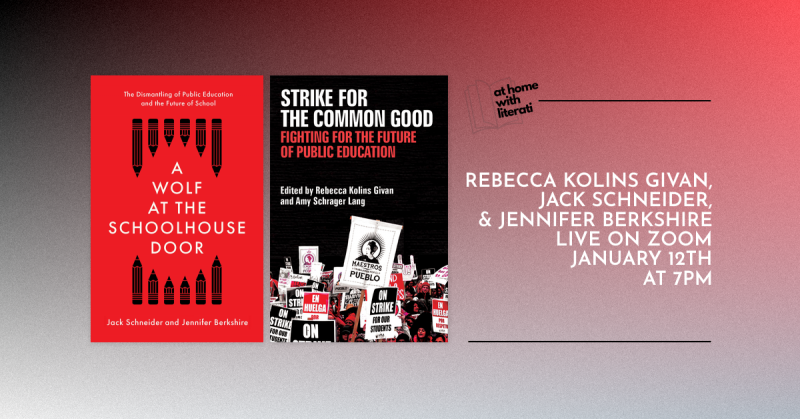 We're pleased to welcome Rebecca Kolins Givan, Jack Schneider, & Jennifer Berkshire to our At Home with Literati virtual event series for an event in support of Strike for the Common Good and A Wolf at the Schoolhouse Door.

About Strike for the Common Good: In February 2018, 35,000 public school educators and staff walked off the job in West Virginia. More than 100,000 teachers in other states--both right-to-work states, like West Virginia, and those with a unionized workforce--followed them over the next year. From Arizona, Kentucky, and Oklahoma to Colorado and California, teachers announced to state legislators that not only their abysmal wages but the deplorable conditions of their work and the increasingly straitened circumstances of public education were unacceptable. These recent teacher walkouts affirm public education as a crucial public benefit and understand the rampant disinvestment in public education not simply as a local issue affecting teacher paychecks but also as a danger to communities and to democracy.

Strike for the Common Good gathers together original essays, written by teachers involved in strikes nationwide, by students and parents who have supported them, by journalists who have covered these strikes in depth, and by outside analysts (academic and otherwise). Together, the essays consider the place of these strikes in the broader landscape of recent labor organizing and battles over public education, and attend to the largely female workforce and, often, largely non-white student population of America's schools.

About A Wolf at the Schoolhouse Door: Betsy DeVos may be the most prominent face of the push to dismantle public education, but she is in fact part of a large movement that’s been steadily gaining power and notching progress for decades—amassing funds, honing its messaging, and crafting policies. While support for public education today is stronger than ever, the movement to save our schools remains fragmented, variable, and voluntary. Meanwhile, those set on destroying this beloved institution are unified, patient, and well-resourced.

In A Wolf at the Schoolhouse Door, Jennifer Berkshire and Jack Schneider, co-hosts of the popular education podcast Have You Heard, lay out the increasingly potent network of conservative elected officials, advocacy groups, funders, and think tanks that have aligned behind a radical vision to unmake public education. They describe the dogma underpinning the work of the dismantlers and how it fits into the current political context, giving readers an up-close look at the policies—school vouchers, the war on teachers’ unions, tax credit scholarships, virtual schools, and more—driving the movement’s agenda. Finally they look forward, surveying the world the dismantlers threaten to build.

As teachers from coast to coast mobilize with renewed vigor, this smart, essential book sounds an alarm, one that should incite a public reckoning on behalf of the millions of families served by the American educational system—and many more who stand to suffer from its unmaking.

Jack Schneider is the author of three books, a co-author (with Jennifer Berkshire) of A Wolf at the Schoolhouse Door: The Dismantling of Public Education and the Future of School (The New Press), and an award-winning education historian. He is a host of the education podcast Have You Heard and lives in Massachusetts.

Jennifer Berkshire is a freelance journalist and a host of the education podcast Have You Heard. The co-author (with Jack Schneider) of A Wolf at the Schoolhouse Door: The Dismantling of Public Education and the Future of School (The New Press), she lives in Massachusetts.

Strike for the Common Good: Fighting for the Future of Public Education (Class : Culture) (Hardcover)

A Wolf at the Schoolhouse Door: The Dismantling of Public Education and the Future of School (Hardcover)