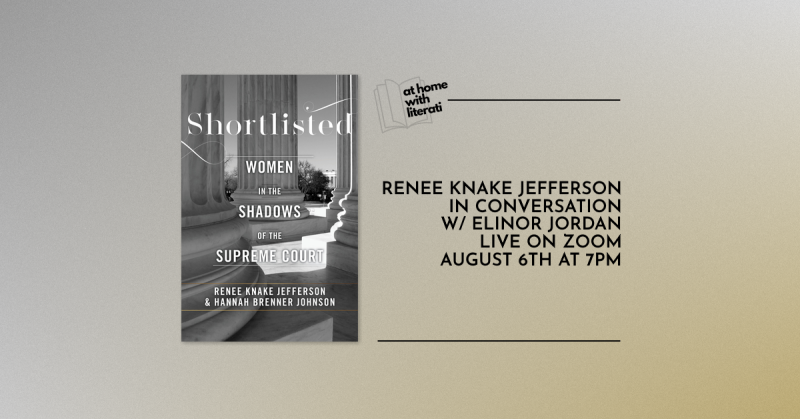 We're pleased to welcome Renee Knake Jefferson, discussing Shortlisted: Women in the Shadows of the Supreme Court with Elinor Jordan.

About the book: Shortlisted tells the overlooked stories of nine extraordinary women--a cohort large enough to seat the entire Supreme Court--who appeared on presidential lists dating back to the 1930s. Florence Allen, the first female judge on the highest court in Ohio, was named repeatedly in those early years. Eight more followed, including Amalya Kearse, a federal appellate judge who was the first African American woman viewed as a potential Supreme Court nominee. Award-winning scholars Renee Knake Jefferson and Hannah Brenner Johnson cleverly weave together long-forgotten materials from presidential libraries and private archives to reveal the professional and personal lives of these accomplished women.

In addition to filling a notable historical gap, the book exposes the tragedy of the shortlist. Listing and bypassing qualified female candidates creates a false appearance of diversity that preserves the status quo, a fate all too familiar for women, especially minorities. Shortlisted offers a roadmap to combat enduring bias and discrimination. It is a must-read for those seeking positions of power as well as for the powerful who select them in the legal profession and beyond.

Renee Knake Jefferson earned her J.D. from the University of Chicago Law School. She holds the Joanne and Larry Doherty Chair in Legal Ethics and is a professor of law at the University of Houston Law Center. Her current administrative leadership includes an appointment as the director of Outcomes and Assessments. In this role, Professor Jefferson is responsible for leading the development and implementation of the Law Center's compliance with the American Bar Association (ABA) standards on learning outcomes and assessment of student learning. At the Law Center, she teaches Constitutional Law, Professional Responsibility, and a seminar on Gender, Law, Leadership, and Power. Professor Jefferson was awarded the Fulbright Distinguished Chair in Entrepreneurship and Innovation at Royal Melbourne Institute of Technology University, a position she held from January-July 2019.  Prior to joining the University of Houston faculty in 2016, Professor Jefferson served as the Foster Swift Professor of Legal Ethics and co-director of the Frank J. Kelley Institute of Ethics and the Legal Profession at Michigan State University College of Law, where she taught for a decade. During her time at Michigan State, she co-founded and secured substantial funding for the law school's inaugural program on technology, entrepreneurship, and innovation in legal services, recently recognized as a top program in the nation. She was appointed to the Michigan State University Board of Trustees in 2019.

Elinor Jordan is the Senior Program Manager for the Survivor Law Clinic at the Michigan Coalition to End Domestic & Sexual Violence, which seeks to transform the criminal justice process through victim rights representation.  Before becoming a lawyer, Elly worked in El Salvador and Washington, DC on human rights and gender equity issues.  Elly later taught and litigated cases on behalf of immigrant children who experienced multiple forms of victimization as a Supervising Attorney with Michigan State University’s Immigration Law Clinic.  While in law school, Elly was the editor-in-chief of the Michigan State Law Review.  Upon graduation, she served as a clerk for the Honorable David W. McKeague of the United States Court of Appeals for the Sixth Circuit and later as an associate specializing in appellate litigation with firm Warner Norcross & Judd.  Elly has published in multiple law reviews and journals on topics related to access-to-justice, immigration, and technology-facilitated abuse.

Shortlisted: Women in the Shadows of the Supreme Court (Hardcover)