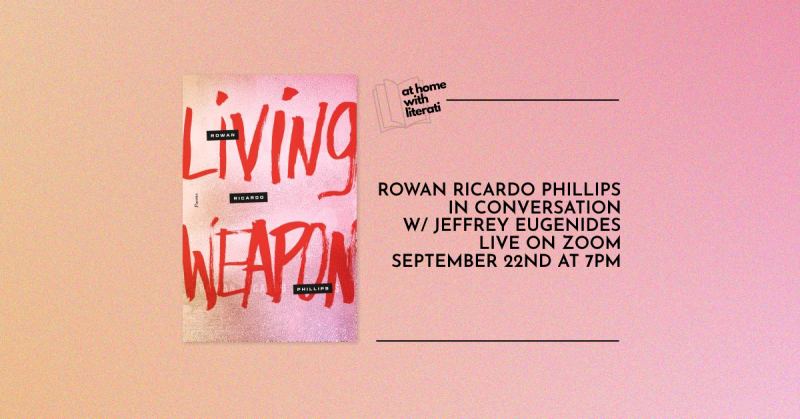 We're pleased to welcome Rowan Ricardo Phillips to our At Home with Literati series of virtual events in support of Living Weapon. He'll be in-conversation with novelist Jeffrey Eugenides.

A revelation, a shoring up, a transposition: Rowan Ricardo Phillips’s Living Weapon is a love song to the imagination, a new blade of light honed in on our political moment. A winged man plummets from the troposphere; four NYPD officers enter a cellphone store; concrete sidewalks hang overhead. Here, in his third collection of poems, Phillips offers us ruminations on violins and violence, on hatred, on turning forty-three, even on the end of existence itself. Living Weapon reveals to us the limitations of our vocabulary, that our platitudes are not enough for the brutal times in which we find ourselves. But still, our lives go on, and these are poems of survival as much as they are an indictment. Couched in language both wry and ample, Living Weapon is a piercing addition from a “virtuoso poetic voice” (Granta).

Rowan Ricardo Phillips is the author of Heaven (FSG, 2015) and The Ground (FSG, 2012). He is the recipient of a Whiting Writers' Award, the PEN/Joyce Osterweil Award, and the GLCA New Writers Award for Poetry, and a Guggenheim Fellowship. He lives in New York City.

Jeffrey Eugenides was born in Detroit and attended Brown and Stanford Universities. His first novel, The Virgin Suicides, was published by FSG to great acclaim in 1993, and he has received numerous awards for his work. In 2003, he received the Pulitzer Prize for his novel Middlesex (FSG, 2002), which was also a finalist for the National Book Critics Circle Award, the International IMPAC Dublin Literary Award, and France's Prix Médicis. The Marriage Plot (FSG, 2011) was a finalist for the National Book Critics Circle Award, and won both the Prix Fitzgerald and the Madame Figaro Literary Prize. His collection of short stories, Fresh Complaint, is from FSG (2017). Eugenides is a professor of creative writing in the Lewis Center for the Arts at Princeton.

The Circuit: A Tennis Odyssey (Paperback)