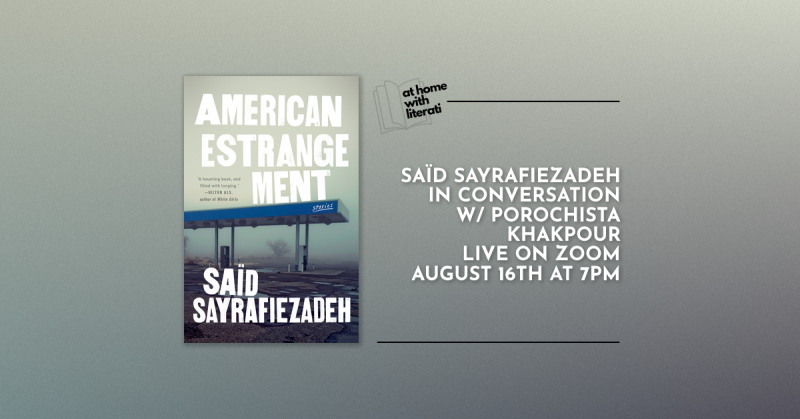 We're pleased to welcome Saïd Sayrafiezadeh to our At Home with Literati Series in support of American Estrangement: Stories. He'll be joined in conversation by Porochista Khakpour.

Click here to join the webinar event on 8/16. No pre-registration required!

Saïd Sayrafiezadeh has been hailed by Philip Gourevitch as a masterful storyteller working from deep in the American grain. His new collection of stories--some of which have appeared in The New Yorker, the Paris Review, and the Best American Short Stories--is set in a contemporary America full of the kind of emotionally bruised characters familiar to readers of Denis Johnson and George Saunders. These are people contending with internal struggles--a son's fractured relationship with his father, the death of a mother, the loss of a job, drug addiction--even as they are battered by larger, often invisible, economic, political, and racial forces of American society.

Searing, intimate, often slyly funny, and always marked by a deep imaginative sympathy, American Estrangement is a testament to our addled times. It will cement Sayrafiezadeh's reputation as one of the essential twenty-first-century American writers.

Saïd Sayrafiezadeh was born in Brooklyn and raised in Pittsburgh. He is the author of a memoir, When Skateboards Will Be Free, and a story collection, Brief Encounters with the Enemy. He is the recipient of a Whiting Award and a Cullman Center Fellowship. His writing has appeared in The New Yorker, the Paris Review, Granta, the New York Times Magazine, and McSweeney's. He teaches at New York University and Hunter College and lives in New York City.

Porochista Khakpour's debut novel, Sons and Other Flammable Objects, was a New York Times Editor's Choice, one of the Chicago Tribune's Fall's Best, and the 2007 California Book Award winner in the First Fiction category. Her second novel The Last Illusion was a 2014 Best Book of the Year according to NPR, Kirkus Reviews, BuzzFeed, PopMatters, Electric Literature, and many more. Among her many fellowships is a National Endowment for the Arts award. Her nonfiction has appeared in many sections of The New York Times, the Los Angeles Times, Elle, Slate, Salon, and Bookforum, among many others. She has been guest faculty at VCFA and Stonecoast's MFA programs, as well as Contributing Editor at Evergreen Review. Born in Tehran and raised in the Los Angeles area, Khakpour currently lives in New York City.