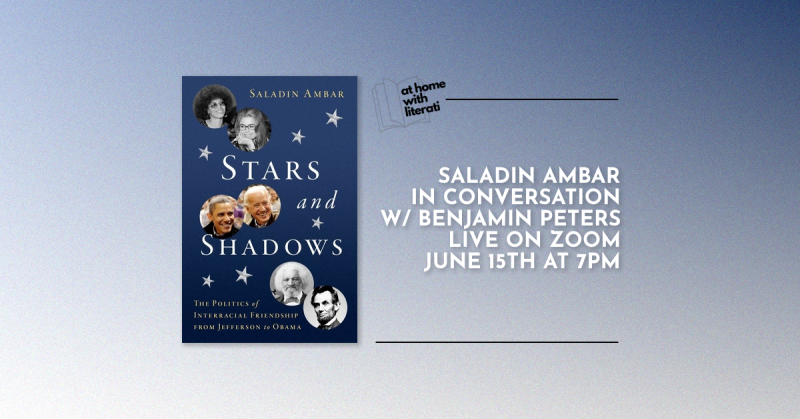 We're pleased to welcome Saladin Ambar to our At Home with Literati Series in support of Stars and Shadows. He will be joined in conversation by University of Michigan professor Benjamin Peters.

Click here to join the webinar event on 6/15. No pre-registration required!

About the Book: A sweeping look into interracial friendship's significance in American democracy from the founding to the present.

The oppression of Blacks is America's original sin — a sin that took root in 1619 and plagues the country to this day. Yet there have been instances of interracial bonding and friendship even in the worst of times. In Stars and Shadows — a term taken from Huckleberry Finn — Saladin Ambar analyzes two centuries of noteworthy interracial friendships that served as windows into the state of race relations in the US and, more often than not, as models for advancing the cause of racial equality.

Stars and Shadows is the first work in American political history to offer a comprehensive overview of how friendship has come to shape the possibilities for democratic politics in America. Covering ten cases — from Benjamin Banneker and Thomas Jefferson's ill-fated effort to navigate the limits imposed on democracy by slavery and white supremacy, to the more hopeful stories of James Baldwin and Marlon Brando as well as Angela Davis and Gloria Steinem — Ambar's study illuminates how friendship is critical to understanding the potential for multiracial democracy. Political leaders and cultural figures are frequently involved in translating private feelings, relationships, and ideas, into a public ideal. Friendships and their meaning are therefore a significant part of any effort to shape public or elite opinion.

The symbolism inherent in interracial friendship has always been readily apparent, down to the powerful example of Barack Obama and Joe Biden, who were not only allied politicians, but most importantly, friends. Ambar weaves a set of interlocking stories that help create a working theory of multiracial democracy that demands more of us as citizens: a commitment to engage one another and to engage our past with even greater courage and trust. Such gestures are a vital part of the story of how race and America have been shaped. Stars and Shadows helps explain America's enduring difficulty in making friends of citizens across the color line — and why the narrative of racial friendship matters.

Saladin Ambar is Professor of Political Science and Senior Scholar at the Center on the American Governor at the Eagleton Institute of Politics at Rutgers University-New Brunswick, where he teaches courses in American politics. He is the author of numerous books, including American Cicero: Mario Cuomo and the Defense of American Liberalism (Oxford) and Malcolm X at Oxford Union (Oxford), which was nominated for a Hurston/Wright Legacy Award for best book in nonfiction, and is currently in development for a feature film by Number 9 Films in the UK.

Benjamin Peters is Director of the Global Scholars Program at the University of Michigan. He earned a Ph.D. in Political Science from Rutgers University and is a member of the Political Science Research Committee of the Center for Global Nonkilling, a member-group of the World Health Organization Violence Prevention Alliance. With Peter Verbeek, he is co-editor of Peace Ethology: Behavioral Processes and Systems of Peace (2018).

Stars and Shadows: The Politics of Interracial Friendship from Jefferson to Obama (Hardcover)