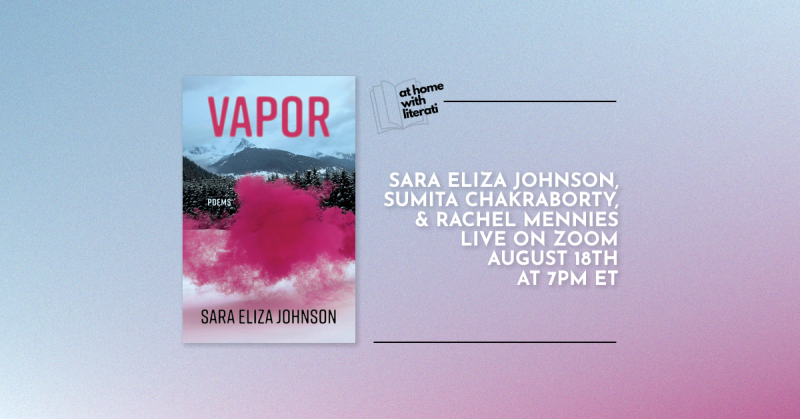 We're pleased to welcome Sara Eliza Johnson to our At Home with Literati Series in support of Vapor. She will be joined by Sumita Chakraborty & Rachel Mennies.

Click here to join the webinar event on 8/18. No pre-registration required!

With a mind informed by physics, and a heart yearning for sky burial, Vapor's epic vision swerves from the microscopic to telescopic, evoking an Anthropocene for a body and planet that are continually dying: "So alone / I open like a grave," Johnson chronicles her love for "all this emptiness, this warp and transparence, the whorl of atoms I brush from your brow," and considers how "each skull, / like a geode, holds a crystal colony inside."

Almost omnipresently, Vapor stitches stars to microbes, oceans to space, and love to pain, collapsing time and space to converge everything at once. Blood and honey, fire and shadow, even death and mercy are secondary to a profoundly constant flux. Facing sunlight, Johnson wonders what it would mean to "put my mouth to its / mouth, suck the fluid / from its throat, and give / it my breath, my skin, / which was once my / shadow," while elsewhere the moon "is molten, an ancient red, and at its bottom is an exit wound that opens into another sea, immaculate and blue, that could move a dead planet to bloom."

In Vapor, Sara Eliza Johnson establishes herself as a profound translator of the physical world and the body that moves within it, delivering poems that show us how to die, and live.

Sara Eliza Johnson is the author of Vapor and Bone Map, which was a winner of the 2013 National Poetry Series. Her poetry has appeared in the Virginia Quarterly Review, Colorado Review, New England Review, Boston Review, Copper Nickel, Ninth Letter, Blackbird, Crazyhorse, Pleiades, the Best New Poets series, Salt Hill, Cincinnati Review, and the Academy of American Poets Poem-A-Day program, among other venues. She is the recipient of a National Endowment for the Arts Fellowship, a Rona Jaffe Foundation Writers' Award, two Winter Fellowships from the Fine Arts Work Center in Provincetown, and a residency from the Virginia Center for the Creative Arts. Johnson is an assistant professor at the University of Alaska, Fairbanks.

Sumita Chakraborty is the author of the poetry collection Arrow (Alice James Books (U.S.)/Carcanet Press (U.K.), 2020), which received coverage in the New York Times, NPR, and the Guardian. Her work in progress includes a scholarly monograph, Grave Dangers: Poetics and the Ethics of Death in the Anthropocene, which is under contract with the University of Minnesota Press. Her poems have been published in Poetry, the American Poetry Review, the Academy of American Poets’ Poem-a-Day series, The Rumpus, The Offing, and elsewhere; her essays and articles have appeared in the Los Angeles Review of Books, Cultural Critique, Interdisciplinary Studies in Literature and the Environment, Modernism/modernity, and College Literature, among others. She has received honors from the Poetry Foundation, the Forward Arts Foundation (U.K.), and Kundiman. She lives in Ann Arbor, where she teaches in literary studies and creative writing at the University of Michigan; in the fall, she’ll be moving to the Raleigh-Durham area to teach at North Carolina State University as Assistant Professor of English and Creative Writing. Find her on Twitter @notsumatra.

Rachel Mennies is the author of The Naomi Letters (BOA Editions, 2021) and The Glad Hand of God Points Backwards (Texas Tech University Press, 2014), winner of the Walt McDonald First-Book Prize in Poetry and finalist for a National Jewish Book Award. Her poems and essays have been published at The Believer, American Poetry Review, Kenyon Review, Poetry Foundation, and elsewhere. She serves as the book reviews editor for AGNI and the series editor, since 2016, of the Walt McDonald First-Book Prize in Poetry at Texas Tech University Press. Originally from the Philadelphia area, Mennies currently lives in Chicago, where she works as a writer, editor, and adjunct professor. Learn more about Rachel Mennies at rachelmennies.com.