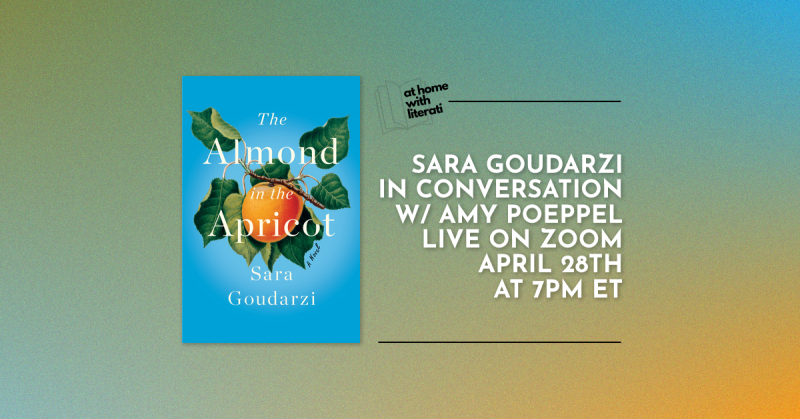 We're pleased to welcome Sara Goudarzi to our At Home with Literati Series in support of The Almond in the Apricot. She will be joined in conversation by Amy Poeppel.

Click here to join the webinar event on 4/28. No pre-registration required!

Emma had the perfect trifecta: a long-term job as an engineer designing sewers; a steady relationship with her reliable boyfriend; and an adoring and creative best friend (about whom she wasn't quite ready to admit her unrequited feelings). Then early one morning, a phone call changed her world forever.

Now she's having nightmares that threaten to disrupt the space-time continuum -- nightmares of hiding from bombs in basements, of glass shattering from nearby explosions. But these disturbing dreams, in which she inhabits the body of a young girl named Lily, seem all too real, and Emma's waking life begins to be affected by the events that transpire in this mysterious wartime landscape. Convinced she has been given a chance to save a life, Emma tries to rescue Lily from heartache, but ultimately it is through Lily that Emma finds her way back.

The Almond in the Apricot navigates connections formed across space and time and explores love, grief, and the possibility that the universe might be bigger than either Emma or Lily ever imagined.

Sara Goudarzi's work has appeared in The New York Times, Scientific American, National Geographic News, The Adirondack Review and Drunken Boat, among others. She is the author of Leila's Day at the Pool and Amazing Animals from Scholastic Inc. Sara has taught writing at NYU and is a 2017 Writers in Paradise Les Standiford fellow and a Tin House alumna. Born in Tehran, she grew up in Iran, Kenya and the U.S. and currently lives in Brooklyn.

Amy Poeppel is the award-winning author of the novels The Sweet Spot, Musical Chairs, Limelight, and Small Admissions. Her writing has appeared in The New York Times, The Rumpus, Literary Hub, and Working Mother. She and her husband have three sons and split their time between New York City, Germany, and Connecticut. She would love to hear from you on Twitter or Instagram: @AmyPoeppel or at AmyPoeppel.com.

The Almond in the Apricot (Hardcover)