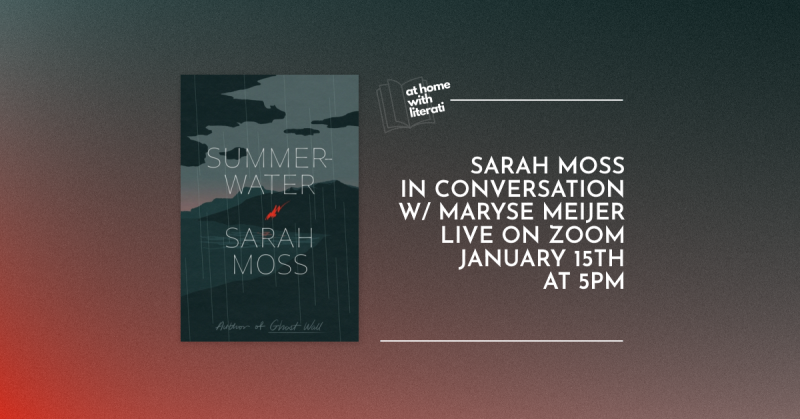 We're pleased to welcome Sarah Moss to our At Home with Literati virtual event series for an event in support of Summerwater. She'll be joined in conversation by Maryse Meijer.

About the book: The acclaimed author of Ghost Wall offers a new, devastating, masterful novel of subtle menace

They rarely speak to each other, but they take notice--watching from the safety of their cabins, peering into the half-lit drizzle of a Scottish summer day, making judgments from what little they know of their temporary neighbors. On the longest day of the year, the hours pass nearly imperceptibly as twelve people go from being strangers to bystanders to allies, their attention forced into action as tragedy sneaks into their lives.

At daylight, a mother races up the mountain, fleeing into her precious dose of solitude. A retired man studies her return as he reminisces about the park's better days. A young woman wonders about his politics as she sees him head for a drive with his wife, and tries to find a moment away from her attentive boyfriend. A teenage boy escapes the scrutiny of his family, braving the dark waters of the loch in a kayak. This cascade of perspective shows each wrapped up in personal concerns, unknown to each other, as they begin to notice one particular family that doesn't seem to belong. Tensions rise, until nightfall brings an irrevocable turn.

From Sarah Moss, the acclaimed author of Ghost Wall--a "riveting" (Alison Hagy, The New York Times Book Review) "sharp tale of suspense" (Margaret Tablot, The New Yorker), Summerwater is a searing exploration of our capacity for kinship and cruelty, and a gorgeous evocation of the natural world that bears eternal witness.

Sarah Moss is the author of Ghost Wall, which was an Editors' Choice in The New York Times Book Review, was long-listed for the Women's Prize for Fiction, and was listed as a Best Book of the Year by The Guardian, Southern Living, Refinery29, The Times Literary Supplement, and Nylon, among other publications. Her other books include the novels Cold Earth, Night Waking, Bodies of Light, and Signs for Lost Children, and the memoir Names for the Sea: Strangers in Iceland. She was educated at the University of Oxford and now teaches at University College Dublin

Maryse Meijer is the author of the story collections Heartbreaker, which was one of Electric Literature’s 25 Best Short Story Collections of 2016, and Rag, which was a New York Times Book Review Editors’ Pick and a finalist for the Chicago Review of Books Award for Fiction, as well as the novella Northwood. She lives in Chicago.
Event date:
Friday, January 15, 2021 - 5:00pm
Event address:
Live on your device

The Seventh Mansion: A Novel (Paperback)