At Home with Literati: Shannon Watts and Zerlina Maxwell 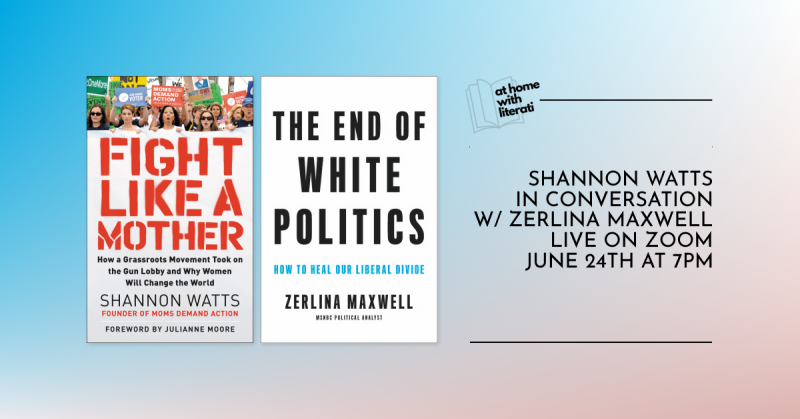 We're pleased to welcome Shannon Watts and Zerlina Maxwell to our At Home with Literati series of virtual events.

About Fight Like A Mother: Shannon Watts was a stay-at-home mom folding laundry when news of the tragic shooting at Sandy Hook Elementary flashed across the television screen. In one moment, she went from outraged to engaged and decided to do something about it. What started as a simple Facebook group to connect with other frustrated parents grew into Moms Demand Action, a national movement with millions of supporters and a powerful grassroots network of local chapters in all 50 states. Shannon has been called "the NRA’s worst nightmare”—and her army of moms have bravely gone up against the gun lobby, showing up in their signature red shirts, blocking the hallways of congress with their strollers, electing gun sense candidates and running for office themselves, proving that if the 80 million moms in this country come together, they can put an end to gun violence. Fight Like a Mother is the incredible account how one mother’s cry for change became the driving force behind gun safety progress. Along with stories of perseverance, courage, and compassion, Watts shines a light on the unique power of women—starting with what they have, leading with their maternal strengths, and doubling down instead of backing down. While not everyone can be on the front lines lobbying congress, every mom is already a multi-tasking organizer, and Shannon explains how to go from amateur activist to having a real impact in your community and beyond. Fight Like a Mother will inspire everyone—mothers and fathers, students and teachers, lawmakers, and anyone motivated to enact change—to get to work transforming hearts and minds, and passing laws that save lives.

About The End of White Politics: After working on two presidential campaigns (for Barack Obama and Hillary Clinton), MSNBC political analyst and SiriusXM host Zerlina Maxwell gained first-hand knowledge of everything liberals have been doing right over the past few elections–and everything they are still doing wrong. Ultimately, these errors worked in President Donald Trump’s favor in 2016; he effectively ran a campaign on white identity politics, successfully tapping into white male angst and resistance. In 2020, after the Democratic Party’s most historically diverse pool of presidential candidates finally dwindled down to Joe Biden, once again an older white man, Maxwell has posed the ultimate question: what now, liberals? Fueled by Maxwell’s trademark wit and candor, The End of White Politics dismantles the past and present problems of the Left, challenging everyone from scrappy, young “Bernie Bros” to seasoned power players in the “Billionaire Boys’ Club.” No topic is taboo; whether tackling the white privilege that enabled Mayor Pete Buttigieg’s presidential run, the controversial #HashtagActivism of the Millennial generation, the massive individual donations that sway politicians toward maintaining the status quo of income inequality, or the lingering racism that debilitated some Democratic presidential contenders and cut their promising campaigns short, Maxwell pulls no punches in her fierce critique. However, underlying all of these individual issues, Maxwell argues that it’s the “liberal-minded” party’s struggle to engage women and communities of color–and its preoccupation with catering to the white, male working class–that threatens to be its most lethal shortfall. The times–and the demographics-are changing, and in order for progressive politics to prevail, we must acknowledge our shortcomings, take ownership of our flaws, and do everything in our power to level the playing field for all Americans. The End of White Politics shows exactly how and why progressives can lean into identity politics, empowering marginalized groups, and uniting under a common vision that will benefit us all.

Shannon Watts is a mother of five who, prior to founding Moms Demand Action for Gun Sense in America, was a stay-at-home mom and former communications executive. The day after the Sandy Hook tragedy, Watts started a Facebook group with the message that all Americans can and should do more to reduce gun violence. That online conversation has grown into a nationwide grassroots movement of Americans fighting for public safety measures that respect the Second Amendment and protect people from gun violence. Moms Demand Action has established a chapter in every state of the country and is part of Everytown for Gun Safety, the largest gun violence prevention organization in the country, with nearly 6 million supporters. In addition to her work with Moms Demand Action, Watts is an active board member of Emerge America, one of the nation’s leading organizations for recruiting and training women to run for office. In 2018, she was named one of InStyle Magazine’s Badass Women, one of People Magazine’s 25 Women Changing the World and a Yerba Buena Center for the Arts 100 Honoree. Watts’ writing has appeared in Vogue, Refinery 29, Time, The Washington Post, The Hill, and other media outlets.

Zerlina Maxwell is the Senior Director of Progressive Programming for SiriusXM. She is the co-host of the award-winning radio show Signal Boost on SiriusXM. She is the author of the book The End of White Politics: How to Heal Our Liberal Divide (Hatchette, July 2020). She is an MSNBC Political Analyst, a speaker, and writer for a variety of national media outlets. Her writing focuses on national politics, candidates, and specific policy and culture issues including race, feminism, domestic violence, sexual assault, victim blaming and gender inequality. Zerlina was formerly the Director of Progressive Media for Hillary Clinton’s presidential campaign. She worked in the campaign’s press shop pitching coverage to progressive media outlets and curating daily messaging for online influencers. She also acted as a campaign spokesperson for the Presidential Debates. In 2016, Zerlina joined pop superstar Lady Gaga on stage at the 88th annual Academy Awards as part of a special performance of her nominated smash, “Til’ It Happens to You” from the film The Hunting Ground. Zerlina has been profiled in the New York Times as a top political twitter voice to follow during the 2012 election season and she was selected by TIME as one of the best Twitter feeds in 2014. In 2015, Zerlina was also one of five journalists invited to travel on Air Force One with President Obama on his trip to Selma for the 50th anniversary of Bloody Sunday. She has a law degree from Rutgers Law School–Newark and a B.A. in International Relations from Tufts University.

The End of White Politics: How to Heal Our Liberal Divide (Hardcover)