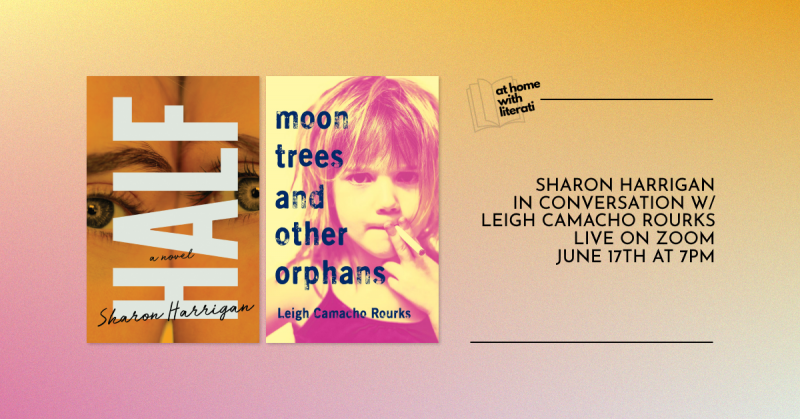 We're delighted to Sharon Harrigan and Leigh Camacho Rourks to our At Home with Literati Series.

About Half: What if two people were so close they shared everything? Paula and Artis are thirty-year-old identical twins who speak in one voice—until they can't anymore. Their father’s sudden death threatens their uncanny bond. While growing up, they believed he possessed magical powers, but they also lived in fear of him. At his funeral, they retrace their early life—one year per chapter. Will they find their way back to each other, or finally discover the singularity of their true selves? Written in spare, lyrical prose, Half is an achingly beautiful coming-of-age story, sprinkled with Greek mythology, magical realism, and murder mystery. In her thought- provoking debut novel, Sharon Harrigan gives voice to the complex relationships within families, showing how our fierce love for one another can also be the very thing that leads us to betrayal.

“Half is mesmerizing, a bright and inventive novel like no other. I was swept away, pulled into the conspiracy that is twindom, with its exquisite sweetness
and cruelty. The mystery that propels the story forward artfully reflects the mystery of twindom itself.”
—Bonnie Jo Campbell, author of Mothers Tell Your Daughters, Once Upon a River, and American Salvage (National Book Award finalist)

About Moon Trees and Other Orphans: A Kirkus (STARRED) and Booklist favorite, Moon Trees and Other Orphans is a gritty collection of short stories set along the Gulf Coast, focusing on themes of desperation, loneliness, and love. Filled with hard-living characters who are deeply lonely, it tracks the ways they fight for survival, often making very bad decisions as they go. Populated by gun toting women, ex-cons, desperate teens, and other outsiders, it is a collection about what life is like in hard places, both beautiful and dangerous.

“The women in Leigh Camacho Rourk’s stories carry guns and they know how to use them. This is the best kind of fiction, well-honed, lean and flinty with deep pockets of compassion and vulnerability and hope, every sentence a made thing. If you love Lucia Berlin and Dorothy Allison, (or even if you don’t) these women will get under your skin and stay there. Moon Trees is a truly stunning literary debut.”
─Pam Houston, author of Deep Creek and Cowboys Are My Weakness

Sharon Harrigan is the author of Playing with Dynamite: A Memoir (Truman State University Press, 2017). Her new book Half was the finalist for the AWP Novel Prize,
and her story upon which this novel is based won the Cecilia Joyce Johnson Award from Key West Seminars and the Kinder Award from Pleaides Magazine. She has
an MFA in Creative Writing from Pacific University and teaches writing at WriterHouse in Charlottesville, VA, where she lives with her husband and daughter.

Leigh Camacho Rourks is a Cuban-American Author who lives and works in central Florida, where she is an assistant professor of English and Humanities at Beacon College. She's the recipient of the St. Lawrence Book Award, the Glenna Luschei Prairie Schooner Award, and the Robert Watson Literary Review Prize, and her work has been shortlisted for several other awards. Her fiction, poems and essays have appeared in Kenyon Review, Prairie Schooner RHINO, TriQuarterly, December Magazine, Greensboro Review and others

Moon Trees and Other Orphans (Paperback)