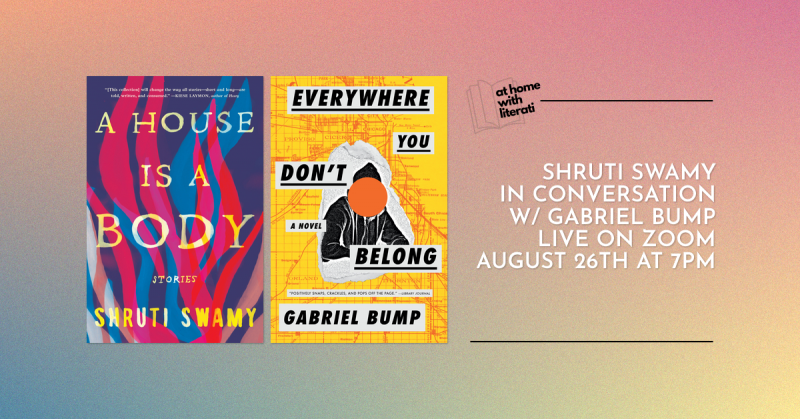 We're pleased to welcome Shruti Swamy and Gabriel Bump to our At Home with Literati series of virtual events in support of their recent titles.

"Swamy's A House Is a Body will not simply be talked about as one of the greatest short story collections of the 2020s; it will change the way all stories--short and long--are told, written, and consumed. There is nothing, no emotion, no tiny morsel of memory, no touch, that this book does not take seriously. Yet, A House Is a Body might be the most fun I've ever had in a short story collection." --Kiese Laymon, author of Heavy

The winner of two O. Henry Awards, Shruti Swamy's work has appeared in The Paris Review, McSweeney's, Prairie Schooner, and elsewhere. In 2012, she was Vassar College's 50th W.K. Rose Fellow, and has been awarded residencies at the Millay Colony for the Arts, Blue Mountain Center, and Hedgebrook. She is a Kundiman fiction fellow, a 2017 - 2018 Steinbeck Fellow at San Jose State University, and a recipient of a 2018 grant from the Elizabeth George Foundation. She lives in San Francisco.

"In Everywhere You Don't Belong, Gabriel Bump completely, beautifully, and energetically illuminates the heretofore unrecognized lines connecting Ellison's Invisible Man to Johnson's Jesus' Son. This is a startling, original, and hilarious book. I look forward to reading it again."
-- Adam Levin, author of The Instructions

Gabriel Bump grew up in South Shore, Chicago. His nonfiction and fiction have appeared in Slam magazine, the Huffington Post, Springhouse Journal, and other publications. He was awarded the 2016 Deborah Slosberg Memorial Award for Fiction. He received his MFA in fiction from the University of Massachusetts, Amherst. He lives in Buffalo, New York.

A House Is a Body: Stories (Hardcover)